April 17 (UPI) -- The first typhoon of 2021 has formed in the western Pacific Basin as "Surigae" underwent rapid intensification over the Philippine Sea, the Joint Typhoon Warning Center said Saturday.

By late Saturday afternoon, local time, Surigae had intensified to 10-minute average sustained wind speeds of 115 mph and was located about 325 nautical miles east of Legazpi, Philippines. It was moving northwest at about 12 mph.

With this level of strengthening, the Surigae became the first tropical system of the year to reach super typhoon status, the JTWC said.

For comparison, a Category 4 major hurricane on the Saffir-Simpson Hurricane Wind Scale in the Eastern Pacific has maximum 10-minute average sustained winds of at least 114 mph. Wind gusts with Super Typhoon Surigae reached up to 161 mph late Saturday afternoon.

Surigae, which first became a tropical storm over the Philippine Sea on Wednesday while churning midway between Guam and the Philippines, is the first tropical cyclone to form anywhere in the northern hemisphere in 2021.

On Thursday, the storm brought more than 9 inches of rain to Koror, the largest city in Palau, as the storm churned over the area.

The storm is called Bising in the Philippines now that it has entered the area monitored by the Philippine Atmospheric, Geophysical and Astronomical Services Administration. Once a tropical storm or typhoon enters this area, it is given a name by PAGASA separate from the international name that it may have already been designated.

The combination of light wind shear and warm ocean waters will aid in the strengthening of the system.

This satellite loop showed Typhoon Surigae gaining strength across the Philippine Sea Saturday. It had developed an "eye" which often indicates a strong tropical system.

"Surigae could at least threaten or brush the eastern Philippines later this weekend or early next week," Zartman said.

The amount of impacts to the Philippines will depend on how quickly Surigae makes a turn to the north over the weekend.

If it turns to the north sooner, the core of the strongest wind and heaviest rain can miss the Philippines and remain across the open waters of the Philippine Sea.

However, should Surigae remain on a westward track slightly longer, strong winds and the heaviest rain could lash the eastern Philippines. 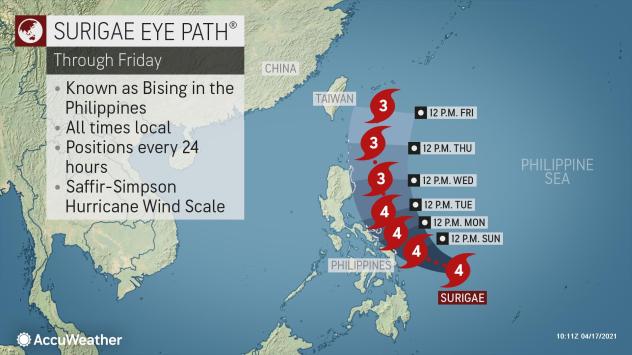 If Surigae tracks far enough west it could spread heavy rain and damaging winds from eastern Mindanao to eastern Visayas and perhaps eastern Luzon from late Saturday into early next week, local time, according to AccuWeather Senior Meteorologist Jason Nicholls.

Rain amounts across the Philippines are expected to reach 4-8 inches in the eastern Visayas and southeast Luzon, perhaps leading to flash flooding and the threat for mudslides across the region.

In eastern Luzon and northeast Mindanao, rainfall of 2-4 inches is expected.

World News // 6 hours ago
G7 leaders to sign anti-pandemic declaration
June 12 (UPI) -- G7 leaders on Saturday plan to sign a Carbis Bay declaration on health to prevent another global pandemic, according to a Downing Street statement.

Chinese officials to be punished for deaths of ultramarathon runners