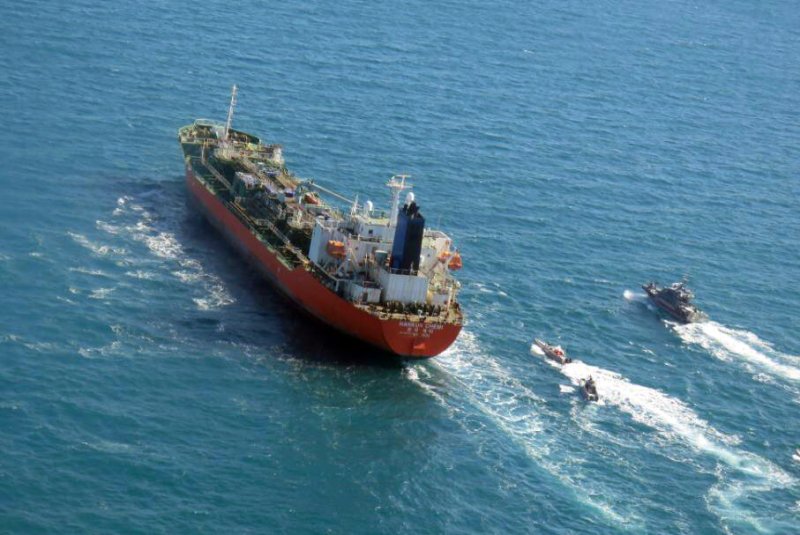 The MT Hankuk Chemi was released on Friday more than three months after it was captured by Iran’s forces in the Strait of Hormuz in January. File Photo by Tasnim News Agency/EPA-EFE

April 9 (UPI) -- Iran confirmed it has agreed to release a South Korea-flagged tanker, more than three months after it was captured in the Strait of Hormuz for alleged pollution at sea.

Said Hativjade, spokesman for Tehran's foreign ministry, said the prosecution found no evidence of malfeasance on the ship or on the part of the ship's captain.

Tehran ordered the release of the crew in February as part of "humanitarian measures," but the South Korean captain and some members of a multinational crew stayed behind to maintain the ship. The captain and 12 crew members were still on board on Friday, Al Jazeera reported.

Hativjade suggested on Friday the seizure of the tanker was justified, citing Iran's policies on the environment.

"Iran, a country with long coastal areas in the Persian Gulf and the Sea of Oman, emphasizes thorough compliance with maritime regulations, including environmental protection regulations," the spokesman said.

South Korea and Iran agreed to free up some of Tehran's assets to purchase COVID-19 vaccines earlier this year. South Korea froze Iran's assets in 2018 after the Trump administration unveiled sanctions against Tehran, a move that drew condemnation from the Iranian government.

The Biden administration said this week it is ready to lift Iran sanctions that are inconsistent with the Joint Comprehensive Plan of Action, signed during the Obama administration.

World News // 55 minutes ago
Poland seeks restitution of 'stolen' Kandinsky painting sold at German auction for $400K
Dec. 3 (UPI) -- Poland's Ministry of Culture and Natural Heritage said it will take legal action and seek restitution after a Wassily Kandinsky painting allegedly stolen from the National Museum in Warsaw was sold at a German auction.

World News // 9 hours ago
French rail strike causes widespread weekend train cancelations
Dec. 3 (UPI) -- France's state state-owned railway company says it has canceled more than half of its scheduled trips this weekend due to a nationwide strike by rail conductors.

World News // 10 hours ago
Ukrainian police foil attempt to steal Banksy mural
Dec. 3 (UPI) -- Eight people who attempted to steal a mural by graffiti artist Banksy off the wall of a war-torn building in the Ukrainian city of Hostomel have been arrested, officials said Saturday.

World News // 11 hours ago
South African president Ramaphosa to run again despite corruption report
Dec. 3 (UPI) -- After previously signaling he would resign, South African President Cyril Ramaphosa confirmed on Saturday that he will not leave office and instead run for a second presidential term.