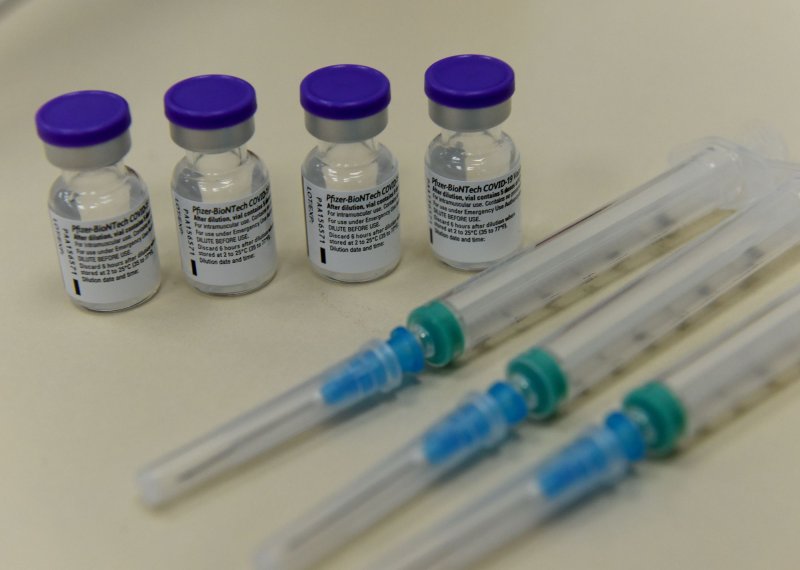 Hong Kong and Macao halted use of the Pfizer-BioNTech vaccine on Wednesday after being notified of issues with its packaging. Photo by Debbie Hill/UPI | License Photo

March 24 (UPI) -- Hong Kong and Macao said Wednesday they have immediately suspended administering the COVID-19 vaccine produced by Pfizer-BioNTech as a "precautionary measure" after a batch had issues with their vial lids.

The Hong Kong government said the suspension is in place "until further notice" as an investigation by German firm BioNTech and Chinese distributor Fosun Pharma is under way to identify the cause of the packaging issue.

"BioNTech and Fosun Pharma have no reason to believe that there is a risk to product safety," the city said, stating that "for the sake of prudence" a second batch produced in Hong Kong would also be shelved until the investigation is complete.

The city said it launched the investigation after Fosun limited Wednesday morning notified it in writing that "deviation in the vial seal" of the vaccine had been observed.

Food and Health Secretary Sophia Chan told reporters Wednesday that they are "very concerned" about the defects but there is "no reasons to believe their products have safety risks," the Hong Kong Free Press reported.

In Macao, the special administrative regional government separately announced the suspension of its Pfizer campaign in a statement citing the same lid packaging defect.

Hong Kong has approved two vaccines and with the suspension announced Wednesday leaves only the China-made Sinovac jab available to residents for the time being.

The announcement of the suspension follows more than a dozen European nations temporarily pausing administering the COVID-19 vaccine developed by AstraZeneca earlier this month due to a small number of cases of blood clotting in those who received the jab. Most nations have since restarted using the vaccine after an investigation by the European regulator found no connection between the cases of blood clotting and the jab.

World News // 17 hours ago
Green Party formally agrees to join German coalition
Dec. 6 (UPI) -- The new German government took another step forward Monday when the Green Party announced it would be a part of a coalition with the Social Democrats and Free Democrats.

World News // 22 hours ago
Euro banknotes to get first full redesigns within a couple years
Dec. 6 (UPI) -- The euro banknotes will be fully redesigned for the first time in their existence, the European Central Bank announced on Monday.

World News // 23 hours ago
ITF says it won't 'punish' people in China over concerns for tennis player Peng Shuai
Dec. 6 (UPI) -- Just days after the Women's Tennis Association said it would not stage any tournaments in China over concern about the well-being of Peng Shuai, the International Tennis Federation has declined to do the same.
Advertisement