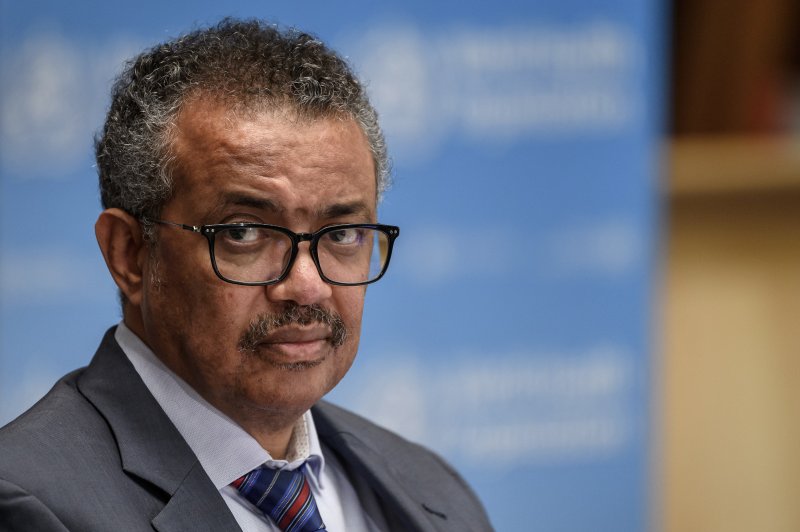 World Health Organization Director-General Tedros Adhanom Ghebreyesus pleaded with rich countries on Monday to share vaccines with poorer countries if not out of morality then to do so out of their self-interest. Photo by Fabrice Coffrini/EPA-EFE

March 22 (UPI) -- World Health Organization Director-General Tedros Adhanom Ghebreyesus chastised rich nations on Monday for seeking to inoculate their entire populations against COVID-19 at the expense of lives in poorer countries, describing the inequitable distribution of vaccines as "becoming more grotesque every day."

"Countries that are now vaccinating younger, healthier people at low risk of disease are doing so at the cost of the lives of health workers, older people and other at-risk groups in other countries," he said during a press conference on Monday. "The world's poorest countries wonder whether rich countries really mean what they say when the talk about solidarity."

In mid-January, Tedros warned the world is on "the brink of a catastrophic moral failure," the price for which would be the lives and livelihoods in the world's poorest countries.

At the time, more than 39 million doses of vaccine had been administered to some 49 richer countries while one poorer nation had only administered 25, he said.

According to Oxford University's Our World In Data project, some 500 million doses have been administered, with the United States at 124 million doses and China at 75 million compared to Nigeria and the Bahamas who as of last week had administered 8,000 doses and 110, respectively.

COVAX, the WHO-led initiative to provide equitable access to vaccines, as of Monday has shipped some 31 million doses to 57 participating nations, including Ghana, Brazil, Uganda, Mali, Malawi and others.

Tedros warned Monday that this inequitable distribution was not simply a moral failure but was also misguided, with rich nations attempting to buy "a false sense of security" through rushing to inoculate their entire populations.

"The more transmission, the more variants and the more variants that emerge the more likely it is they will evade vaccines," he said. "And as long as the virus continues to circulate everywhere, anywhere, people will continue to die."

Trade and travel will continue to be disrupted, he said, and it will also undo economic recoveries.

Without naming any nation, Tedros appealed to them that if they weren't going share vaccines for "the right reasons" then do it "out of self-interest."

He praised South Korea, a wealthier nation that could have secured doses through deals inked directly with countries, for having "waited its turn" for those supplied through COVAX.

He also named pharmaceutical giant AstraZeneca as being the only COVID-19 vaccine manufacturer to commit to not profiting off of its medicine and for licensing its technology to other companies that have produced more than 90% of the vaccines distributed through COVAX.

"We nee more vaccine producers to follow this example," he said.

Since being inaugurated in January, U.S. President Joe Biden has committed $2 billion to COVAX.

In December, the People's Vaccine Alliance, a coalition of health and humanitarian organizations, accused richer nations of having "hoarded" vaccines, stating while dozens of poorer nations were for doses, the richest countries secured enough to inoculate their populations three-fold.

According to data curated by Johns Hopkins University, more than 123.6 million people have been sickened by the virus, including 2.7 million who lost their lives.

World News // 1 hour ago
Myanmar junta slaps strict election regulations on political parties
Jan. 28 (UPI) -- The military junta that has ruled Myanmar since the 2021 has released a 20-page document detailing an extensive list of regulations for political parties who wish to run in future elections.

World News // 3 hours ago
China claims COVID-19 deaths cut in half during Lunar New Year period
Jan. 28 (UPI) -- China on Saturday reported its death toll from COVID-19 fell by 50% last week even as the country celebrated the Lunar New Year with loosened restrictions.

World News // 4 hours ago
Jerusalem violence continues as 13-year-old shoots, injures 2 civilians
Jan. 28 (UPI) -- Two civilians were injured in a fresh shooting incident in occupied East Jerusalem on Saturday, authorities said, just a day after seven people were killed at a synagogue in the troubled city.

World News // 5 hours ago
Former NATO general Pavel elected president of Czech Republic
Jan. 28 (UPI) -- Former army general and NATO officer Petr Pavel was elected as the new president of the Czech Republic on Saturday after the results of a runoff election were counted.