President Joe Biden returns to the White House in Washington, D.C., on Tuesday after traveling to Pennsylvania and spending the previous night in Wilmington, Del. Photo by Chris Kleponis/UPI | License Photo

March 18 (UPI) -- The Russian government reacted sternly Thursday to a television interview in which U.S. President Joe Biden said he thinks Russian leader Vladimir Putin is a "killer" and that he will "pay a price" for interfering in the 2020 election.

Biden made the remarks on Wednesday night during an interview with ABC News. The president was asked if he thinks the Russian president is a killer.

The president also said during the interview that Moscow will face consequences for interfering in the November presidential election. A report from the Office of the National Intelligence Director this week said Putin had approved failed efforts to interfere and help former President Donald Trump win re-election.

The U.S. intelligence community has also repeatedly confirmed that Russia meddled in the 2016 election, too, in Trump's favor.

"When we evaluate other people or even other governments, we always look as if into the mirror," Putin said during an event marking the seventh anniversary of Russia's annexation of Crimea. "We always see ourselves in it."

"I remember when I was young and I got into fights with my friends, we always used to say whoever calls names is called that himself," he added.

"The U.S. authorities in general seek certain relations with us, but only in areas the U.S. is interested in, and on their own terms," he said.

"They think that we are just like them, but we aren't. Our genetic, cultural and moral codes are different."

World News // 7 hours ago
Greece to make COVID-19 vaccine mandatory for people over 60
Nov. 30 (UPI) -- Greek Prime Minister Kyriakos Mitsotakis announced plans Tuesday to fine people over the age of 60 if they aren't vaccinated against COVID-19.

World News // 12 hours ago
Report: Taliban executed more than 100 police, military officers after takeover
Nov. 30 (UPI) -- After forcibly sweeping back to power in Afghanistan in August, the Taliban executed over 100 former police and military members, according to a report released Tuesday by Human Rights Watch. 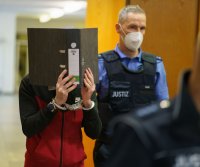 World News // 14 hours ago
IOC official 'disappointed' in ongoing concern for Chinese tennis star Peng Shuai
Nov. 30 (UPI) -- A top Olympic official says people who concerned about the well-being of Chinese tennis player Peng Shuai should stop speculating about a conspiracy over a recent video call between she and IOC chief Thomas Bach.

World News // 16 hours ago
Myanmar judge delays verdicts for Suu Kyi to hear from one more witness
Nov. 30 (UPI) -- A judge in Myanmar on Tuesday postponed some of the trial verdicts for ousted civilian leader Aung San Suu Kyi to allow for more testimony from a senior member of Suu Kyi's political party.
Advertisement