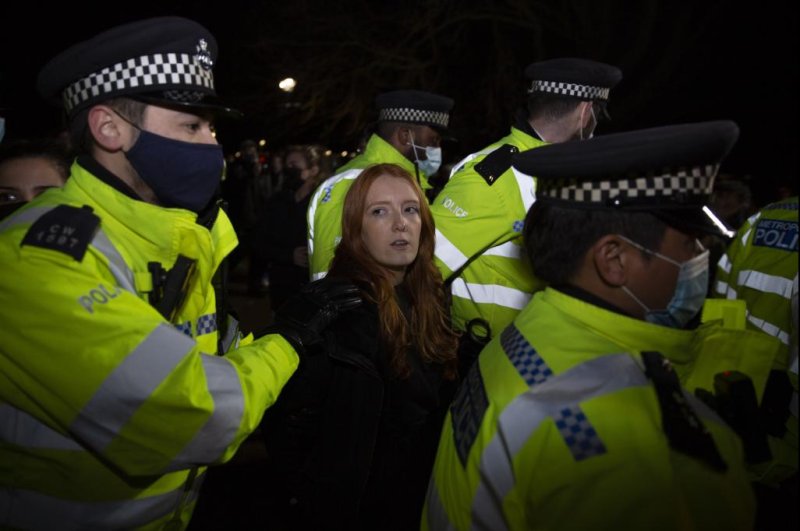 A woman is led by police during a vigil by a band stand in Clapham Common, near where Sarah Everard was last seen alive on March 3, after the Reclaim These Streets vigil for Sarah Everard was officially cancelled in London, Britain, Saturday. Photo by Joshua Bratt/EPA-EFE

March 13 (UPI) -- Officials and activists across the political spectrum criticized London's Metropolitan Police for their handling of a vigil for murdered 33-year-old Sarah Everard Saturday.

The BBC reported police handcuffing and leading women away from a vigil for the woman, who disappeared March 3 and whose remains were found last week.

Organizers had planned an in-person vigil, but police refused to grant a permit.

But hundreds of people streamed to the bandstand in Clapham Common carrying candles and flowers, with some saying they were more determined to come out after police refused the permit.

"The irony of it is so explicit - are you going to drag women off the street for protesting about a woman being dragged off the street?" Deborah Bestwick, 62, told The Guardian.

Police stood back at first, began pushing their way on to the bandstand while one woman was speaking and told the crowd to disperse although the event was largely peaceful, according to media accounts.

The BBC reported at least four people were arrested, and multiple outlets reported that protesters shouted "arrest your own" and "shame on you" as women were handcuffed and taken away to a police van.

Also Saturday, Metropolitan police officer Wayne Couzens, 48, appeared at Westminster Magistrates Court and has been remanded in custody. He will next appear in court at the Old Bailey in London March 16.

Everard disappeared while walking in Clapham in south London, and her remains were found this week. 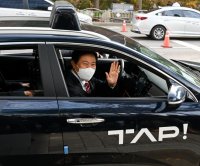 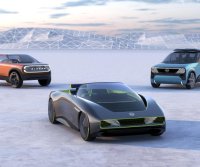 World News // 22 hours ago
Nuclear talks with Iran resume after six-month hiatus
Nov. 29 (UPI) -- For the first time in six months, discussions to revive the Iran nuclear deal began on Monday in Vienna.