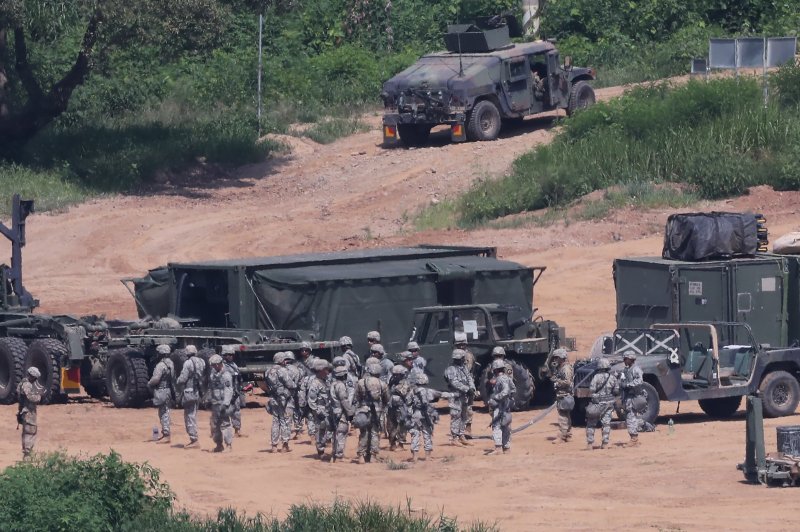 The United States and South Korea are proceeding with the resumption of drills, many of which were halted, reduced or postponed amid an engagement phase with North Korea. File Photo by Yonhap

March 2 (UPI) -- The United States and South Korea have begun crisis management staff training ahead of planned military exercises, but the main drill could be being delayed due to the coronavirus pandemic, according to a South Korean press report.

News 1 reported Tuesday CMST is to take place for four days to simulate a joint response to emergency situations including terrorist attacks. The training does not simulate an all-out war scenario. It has been carried out in the past by the South Korean military alone, the report said.

Last year during an early stage of the COVID-19 pandemic the two sides canceled March exercises. Plans are proceeding with the resumption of drills, many of which were halted, reduced or postponed amid an engagement phase with North Korea.

U.S. Pentagon spokesman John Kirby said at a briefing Monday the training is being carried out to "maintain a high level of readiness" amid signs of North Korean weapons development.

"The training and readiness there is of utmost importance to the secretary, to the entire military and to our alliance," Kirby said.

He declined to provide details of the training.

"We don't talk about the specifics of training events there on the peninsula," Kirby said.

According to News 1, training plans could be being hindered by logistics. South Korea has expressed a willingness to move forward with Full Operational Capability tests, ahead of a potential transition of wartime operational control involving the two sides and a "future combined command." Exercises this month could be reduced in size because of COVID-19, however.

U.S. troops stationed outside the peninsula have yet to arrive and quarantine for two weeks ahead of exercises, according to the report.

South Korean Defense Ministry spokesman Boo Seung-chan said Tuesday the scope and scale of the joint exercises have "not been finalized" but Seoul and Washington are closely discussing plans while taking account of the pandemic.

World News // 18 hours ago
Vast plumes of methane bubbling up from Nord Stream leaks
Sept. 30 (UPI) -- Scientists confirm that the ruptured Nord Stream natural gas pipeline network is spewing vast quantities of methane from the floor of the Baltic Sea.

World News // 18 hours ago
Thailand prime minister to stay in office until 2025
Sept. 30 (UPI) -- Thailand Prime Minister Prayuth Chan-ocha will be allowed to stay in office through 2025 after the country's Constitutional Court ruled on Friday that his eight-year term in officer started in 2017 and not when he took p

World News // 21 hours ago
Putin signs annexation order for 4 Ukrainian regions
Sept. 30 (UPI) -- Ukrainian officials said on Friday that "dozens" of civilians were killed by a Russian strike while in a convoy of cars heading to pick up relatives in the city of Zaporizhzhia.

World News // 1 day ago
U.S. diplomat elected to lead U.N. IT agency over Russian official
Sept. 29 (UPI) -- American Doreen Bogdan-Martin beat out a Russian official on Thursday, to become the next secretary-general of the International Telecommunication Union.