City of Seoul vows tough measures against rallies amid COVID-19

The city of Seoul and city police are banning rallies that exceed nine people, according to a local press report. File Photo by Keizo Mori/UPI | License Photo

Feb. 23 (UPI) -- The city of Seoul said it plans to enforce limits on protests and large gatherings on March 1, an annual holiday in South Korea that commemorates an anti-colonial independence movement.

"The city of Seoul will take all necessary measures to prevent infections that could arise because of illegal assemblies," Kim said. "We will respond firmly as soon as we confirm the type and size of the rallies."

On Tuesday, Seoul Metropolitan Police said no assembly in restricted areas is to exceed nine people. Police also said 95 rallies have been banned because each gathering would exceed 10 people.

South Korea has reported lower rates of COVID-19 infections than most other countries since the start of the pandemic, but hundreds of new cases reported daily during the "winter wave" of the epidemic has prompted local authorities to reinforce social distancing measures that were eased mid-2020.

City Hall's statement comes after conservative protesters said they plan to hold rallies against the administration of South Korean President Moon Jae-in, according to the Donga.

South Korean groups, including Our Republican Party, a vocal anti-Moon group, and other right-wing protesters, are planning to hold gatherings March 1 to call for the "early resignation" of Moon.

South Korean conservatives have said Moon failed to revive an ailing economy and acted late on procuring a COVID-19 vaccine. The groups have also denounced the government for appointing officials later found guilty of bribery.

Seoul is without a mayor until April, when by-elections are scheduled to take place. On Tuesday two candidates for mayor, former Seoul Mayor Oh Se-hoon and former lawmaker Na Kyung-won, took part in a debate that focused on policies for a basic income and financial relief for newlyweds, KBS reported.

South Korea's marriage and birth rates have declined in the past two decades.

World News // 9 hours ago
Green Party formally agrees to join German coalition
Dec. 6 (UPI) -- The new German government took another step forward Monday when the Green Party announced it would be a part of a coalition with the Social Democrats and Free Democrats. 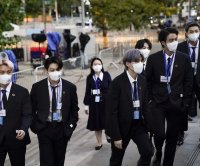