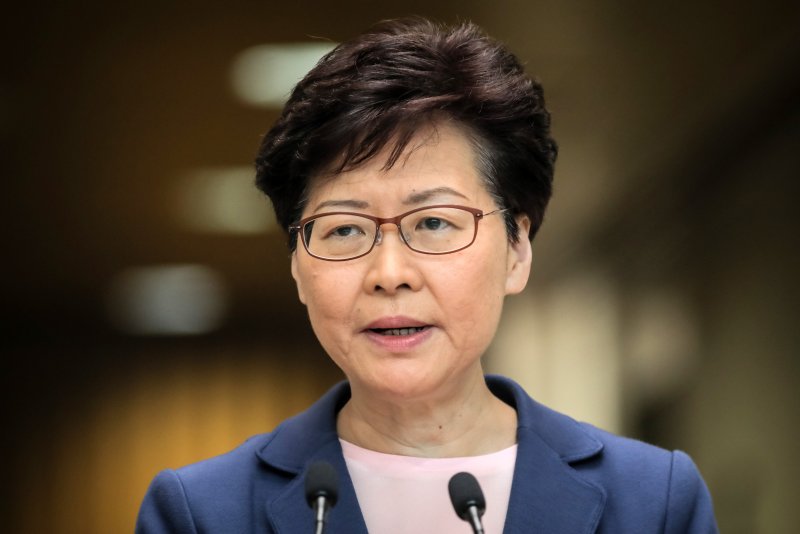 Hong Kong's chief executive Carrie Lam said police are being intimidated and threatened in the city amid an ongoing crackdown against pro-democracy protesters. File Photo by Vivek Prakash/EPA-EFE

"It's not just police officers, but many public officers in the frontlines in recent years. They have been intimidated, threatened, and insulted in carrying out their duties," Lam said, according to the report.

Lam said curbing free speech in Hong Kong would be "striking the needed balance" between freedom of expression and the interests of authorities.

"As many court cases have made it very clear, these rights and freedoms are not without limitations, so when they undermine another person's rights, then of course something needs to be done," she said.

The Wall Street Journal reported Monday Beijing seeks to curb the influence of opposition groups on a 1,200-member committee that picks Hong Kong's chief executive. Lam, a pro-Beijing loyalist who has defended crackdowns against protesters, has not confirmed her intention to run again for a second five-year term in 2022.

If Hong Kong goes ahead with revisions, 117 seats dominated by Hong Kong's pro-democracy politicians would either be reduced or eliminated. The seats also could be granted to pro-China politicians, the report said.

Chinese government officials have spoken in favor of stepping up controls.