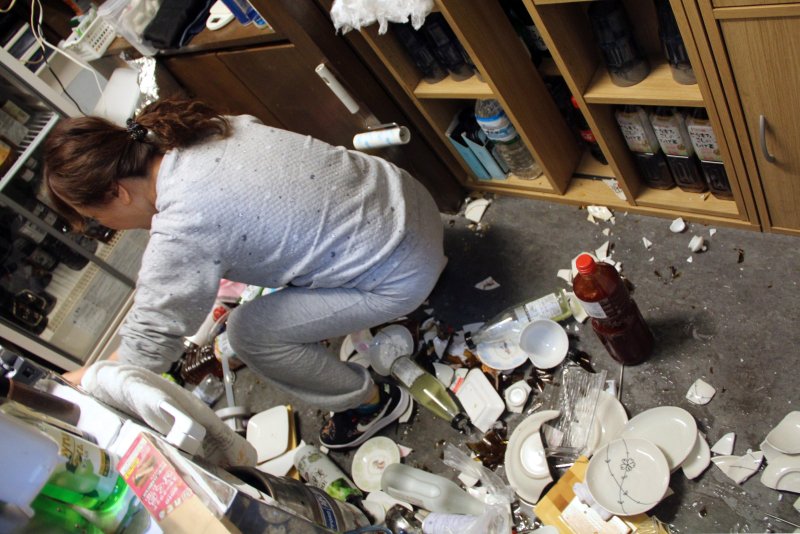 The quake struck Saturday night with its epicenter off the coast of Fukushima, about 135 miles north of Tokyo, according to the Japan Meteorological Agency.

It registered a strong 6, the second highest level on the seismic intensity scale, in which it is impossible for a person to remain standing or move without crawling, in the southern part of Miyagi and in the Nakadori central and Hamadori coastal regions of Fukushima, the agency said. In Tokyo, the quake registered a 4 on the scale.

In Fukushima and Miyagi prefectures, several residents were transported to hospitals, but there were no early reports of serious injuries.

NHK showed footage of a landslide that blocked part of the Joban Expressway in Fukushima prefecture, prompting the closure of the entire expressway. Police said there were no reports of injuries.

At least 950,000 homes nationwide were without power by midnight, government spokesman Katsunobu Kato said at a news conference.

The quake comes less than a month before the 10th anniversary of the March 11, 2011, 9.0-magnitude earthquake which triggered a tsunami and meltdown at Fukushima Daiichi Nuclear Power Plant. The 2011 disasters killed nearly 16,000 people, and displaced hundreds of thousands. The operator of the now disabled Fuskushima nuclear power plant said no abnormalities were detected after Saturday's quake.

World News // 5 hours ago
Coronavirus surging in India with 400,000 daily cases, 4,000 deaths
May 9 (UPI) -- Coronavirus is continuing to surge in India as daily cases surpassed 400,000 on May 9 for the fourth day in a row and deaths were above 4,000 for back-to-back days in the nation as the pandemic is subsiding elsewhere in the aftermath of restrictions and ramped-up vaccines.

World News // 23 hours ago
China lands its first rover on Mars
May 15 (UPI) -- China landed a rover on the surface of Mars for the first time Saturday, the China National Space Administration announced.