Houthi supporters shout slogans and brandish weapons during an anti-Saudi gathering to mobilize more fighters into several battlefronts in Sana'a, Yemen, on November 10, 2016. On Friday, the U.S. State Department said that though it's revoking a terrorist designation for the rebel group, it's still "clear eyed" about its malign activities. File Photo by Yahya Arhad/EPA

Feb. 12 (UPI) -- U.S. Secretary of State Antony Blinken announced Friday he's revoking the terrorist designation of Houthi rebels in Yemen one week after the Biden administration said it would no longer support military operations in the country.

The group, known officially as Ansarallah, has been locked in a civil war with the Saudi-backed government of President Abdu Rabbo Mansour Hadi since 2014. The United States provided military support to a Saudi-led coalition fighting on behalf of the Hadi government, but Biden withdrew U.S. involvement Feb. 4.

"This war has to end," Biden said. "We are ending all American support for offensive operations in the war in Yemen, including relevant arms sales."

Blinken said the U.S. decision to end its designation of the Houthi rebels as a terrorist organization was in response to humanitarian groups' warnings that such a label and sanctions could prevent civilians from accessing basic needs such as food and fuel.

"The revocations are intended to ensure that relevant U.S. policies do not impede assistance to those already suffering what has been called the world's worst humanitarian crisis," Blinken said. "By focusing on alleviating the humanitarian situation in Yemen, we hope the Yemeni parties can also focus on engaging in dialogue."

Blinken's statement said the U.S. government "remains clear-eyed" regarding the rebels' "malign" actions, including the capture of much of western Yemen, including the capital of Sana'a, forcing Hadi to flee to the port city of Aden. About 80% of Yemen's population live in the Houthi-controlled area.

The FTO revocation comes amid an increase in violence by the Houthi rebels, many of which have impacted Saudi civilians, according to the State Department.

The war in Yemen between the Houthi rebels and the Saudi-backed Yemen government has devolved Yemen into the world's "worst humanitarian crisis," the United Nations has said, as it has resulted in some 24 million of its nearly 30 million population requiring some form of humanitarian need, according to the United Nations Office for the Coordination of Humanitarian Affairs.

RELATED Biden orders increase of refugee admissions to 125,000 by 2022

In late November, U.N. Secretary-General Antonio Guterres warned that Yemen was in danger of falling into the worst famine seen in decades.

A reduction in U.N. relief operations, a failure to sustain support for Yemen's economy and locusts and floods destroying crops have exacerbated issues caused by the civil war, he said. 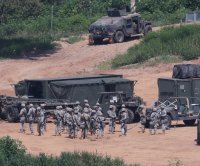