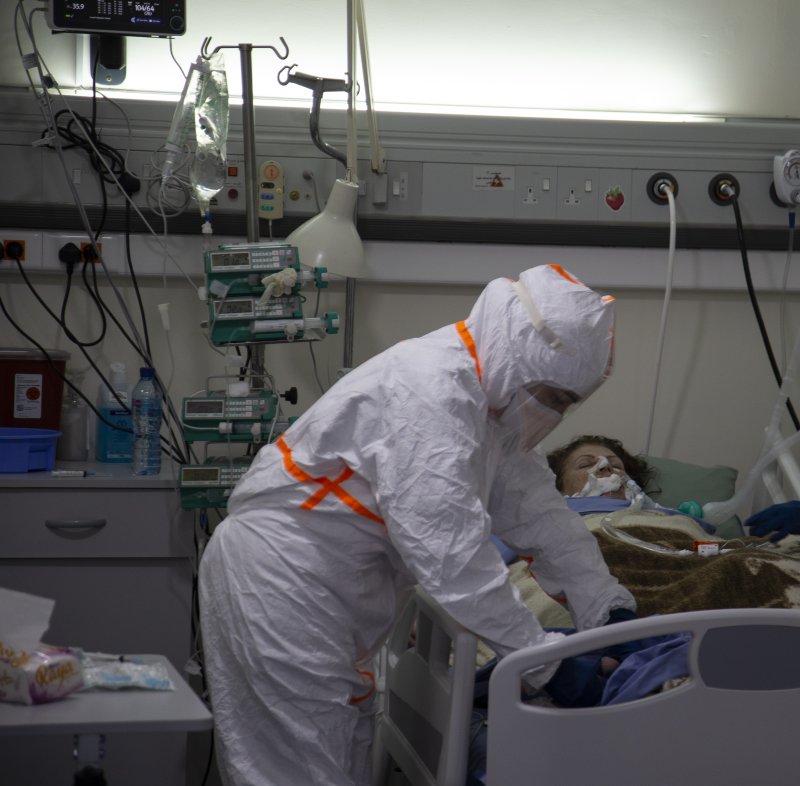 Alarming scenes of patients waiting or being treated in front of hospitals prompted officials Monday to declare a state of health emergency, including a 24-hour curfew for 11 days starting Thursday and reducing airline passenger traffic to 20 percent, along with stricter measures for travelers coming from Baghdad; Istanbul and Adana, Turkey; Cairo; and Addis Ababa, Ethiopia.

Private hospitals were ordered to increase their capacity by adding more ICU beds and warned against turning away COVID-19 patients.

While schools, universities, shops and businesses must stay closed, supermarkets were only to provide delivery services.

The security forces were ordered to enforce the restrictions, including forcing those people and businesses exempted from the curfew to respect safety measures, including staying indoors, wearing masks and practicing social distancing .

Relaxed rules and laxity in adhering to COVID-19 preventive measures culminated with organized gatherings and parties during Christmas and New Year holidays. During the past 10 days, coronavirus cases at one point reached a record 5,500 cases a day.

President Michel Aoun warned during the High Defense Council meeting on Monday against the "dangerous" health situation, referring to "tragic scenes of citizens in front of hospitals looking for a seat or a bed."

The Lebanese Red Cross transported 1,256 COVID-19 cases in 10 days to hospitals, mostly in Beirut, rushing patients from one hospital to another to find a vacant bed. Last week, its operations room witnessed a peak day when it received 4,300 calls from people complaining of breathing difficulties or requesting oxygen and medications.

Dr. Charaf Abou Charaf, president of the Lebanese Order of Physicians, welcomed the new government measures, saying, "There is no other option as the number of coronavirus cases are increasing that much and that fast."

Abou Charaf told UPI the new restrictions could ease the pressure on the drained medical staff and allow the nearly 140 private hospitals, which already accommodate 80 percent of Lebanon's ordinary patients, to secure more ICU beds to treat the growing number of COVID-19 cases.

He noted, however, that the 11-day curfew was not enough to slow the pandemic spread as the number of cases is set to increase.

"The chaos during the holidays has made the situation worse and I expect the cases to double," Abou Charaf said.

After more than 2,000 doctors and nurses caught the virus during the past months, 20 percent of resident doctors are now infected.

"In one hospital in Beirut, 17 resident doctors caught the virus and two doctors are in the intensive care unit," he said.

Lebanon is grappling with its most severe financial crisis ever. With the national currency having lost 80 percent of its value, the U.S. dollar skyrocketing in the black market and banks limiting withdrawals from saving accounts, hospitals are struggling to purchase medical supplies and keep operations afloat.

Dr. Assem Araji, a cardiologist and a lawmaker who heads the parliamentary health committee, said the new measures were much better than the ones adopted previously "but the most important is to apply them and the people to respect them."

"Those who are respecting the coronavirus measures are paying the price of the recklessness of those who don't," Araji told UPI. "During this week, we expect to start receiving the dangerous cases of the holiday chaos and the number of ICU patients to increase."

He explained that 559 of 600 ICU beds are occupied by COVID-19 patients, which makes it impossible for the hospitals to admit an expected 50 such patients per day.

According to Araji, 67 private hospitals have been reluctant to complete preparations to receive more coronavirus patients, while the government-run Rafik Hariri University Hospital suffered the "great burden" of treating 50 percent of the cases.

Private hospitals, many of which were badly damaged by the massive blast that ripped through the Beirut port on Aug. 4, blamed the delay on the government, which failed to cover unpaid bills amounting to billions of Lebanese pounds that have been accumulating since 2012.

With soaring unemployment, poverty and inflation rates, the total lockdown is feared to increase the suffering of the poor families who barely can make ends meet despite a new government decision to start distributing in the coming few days 400,000 Lebanese pounds to 280,000 families in need.

In December, caretaker Minister of Health Hamad Hassan announced that Lebanon had reserved 2.1 million doses of the Pfizer vaccine that would allow it to cover up to 20 percent of the population. The first shipment was expected to arrive in February.

However, the German pharmaceutical giant refused to sign the agreement and authorize the use of its product unless the Lebanese parliament passes an emergency law that protects it against any legal action in case of side effects.

Araji expected the parliament to convene soon to pass the law that would also allow private medical companies to import the vaccines.

"The vaccine will be distributed for free by the Health Ministry, which is seeking a loan from the World Bank, while those who can afford it can get it through the private medical companies," he said.