Bitain's Prime Minister Boris Johnson signs the Trade and Cooperation Agreement between Britain and the European Union on Wednesday. Photo by Andre Parsons/EPA-EFE

Jan. 1 (UPI) -- Britons woke up to its new Brexit world Friday -- one in which it no longer has freedom of movement with other members of the European Union. Those transporting goods between Northern Ireland and Britain need to fill out customs declarations, and the service sector will be hit with fees.

The country, though, will get to call the shots on its own trade deals with other nations and will not be burdened with EU regulations on a host of issues, such as immigration, that brought on Brexit in the first place.

"This is an amazing moment for this country," Prime Minister Boris Johnson said in his New Year's message Thursday.

"We have our freedom in our hands and it is up to us to make the most of it. I think it will be the overwhelming instinct of the people of this country to come together as one United Kingdom -- England, Scotland, Wales and Northern Ireland -- working together to express our values around the world."

Goods crossing the border between Britain and EU member countries are now subject to customs and other checks, which could result in delays and disruptions as commercial truckers prepare paperwork physically and online.

There were no signs of trouble early Friday, though, as the first haulers transported goods across the new customs border between Britain and EU member France. They swiftly exchanged clearance documents to French agents before loading them onto a train to pass through the Eurotunnel.

While the Brexit trade deal places no tariffs on British goods, that does not cover the country's service sector. Britain exports roughly $35 billion in financial services to the EU every year alone and $134 billion in other services including legal, accounting, advertising, architecture, insurance and tech support.

World News // 3 hours ago
Distress beacon from islands near Tonga eruption site detected
Jan. 17 (UPI) -- A distress signal emanating from a pair of isolated, low-lying islands near Tonga has been detected in the wake of this weekend's undersea volcano eruption, United Nations officials said Monday.

World News // 3 hours ago
Amazon reverses decision to stop accepting Visa cards in Britain
Jan. 17 (UPI) -- Amazon and Visa appear to have reached an agreement for Visa cards to be accepted on Amazon's British platform after the retail giant previously threatened to stop taking them by this week. 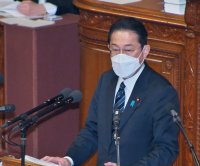 World News // 10 hours ago
China decides not to sell tickets to public for Winter Olympics in Beijing
Jan. 17 (UPI) -- The Beijing Winter Olympics Organizing Committee announced Monday that tickets will not be sold to the public but will be distributed "exclusively" to residents of the country who meet strict COVID-19 requirements.

World News // 15 hours ago
Oxfam: Billionaires' wealth grew by $5T amid pandemic while 160M forced into poverty
Jan. 17 (UPI) -- The two years of the pandemic have exacerbated the gap between the haves and have nots with the world's billionaires seeing their fortunes balloon while more than 160 million people have been pushed into poverty.
Advertisement