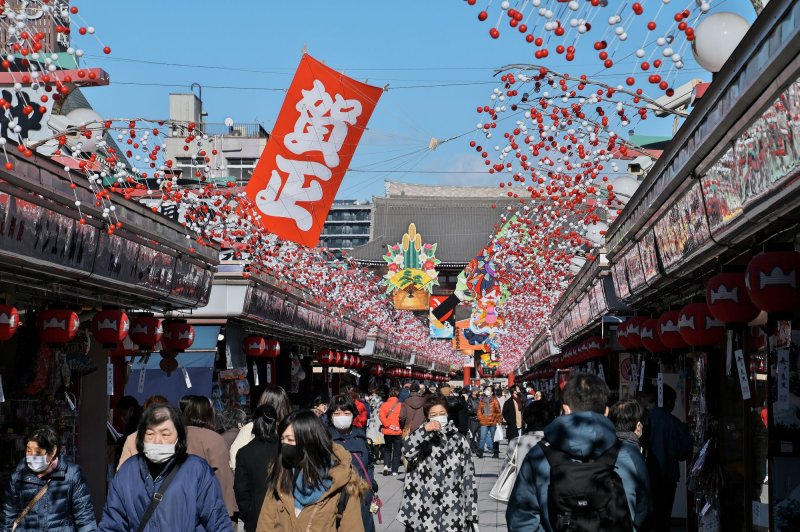 Japan's government announced new temporary restrictions on non-resident and foreign air travelers to fight the spread of a new variant of the coronavirus. Photo by Keizo Mori/UPI | License Photo

Dec. 28 (UPI) -- Japan clamped down on international visits by non-resident foreign nationals until the end of January in response to the spread of a new more virulent variant of the coronavirus that has sickened people in 20 countries.

"They say that no evidence is showing the vaccines that are already being administered overseas are not effective against this variant, and anti-infection steps for it are unchanged from those for the conventional virus," Prime Minister Yoshihide Suga said Monday, urging residents to have a "calm" New Year celebration. "The virus recognizes no year-end or New Year holidays," Suga added.

New travel rules will require Japanese citizens and foreign residents traveling from countries where the variant has been found to submit negative virus test results from within 72 hours of travel and undergo another test upon arriving in Japan. The rules start Wednesday and last through the end of January.

Business travelers and students from mainland China, Taiwan and South Korea and some other Asian nations, are exempt from the new rules.

At least eight people in Japan have been infected with the new variant of the virus, including an airline pilot who visited London and a Tokyo woman hospitalized after returning from Britain, the Japan Times reported.

The new variant was first discovered in Britain in September, where health officials said Friday it can be 70% more transmissible.

Japan has experienced 221,412 active cases and 3,100 deaths with a record high number of daily new cases at 3,892 recorded on Saturday, according to the Johns Hopkins University Tracker.

Yuichiro Hata, 53, a Japanese former transport minister and parliamentarian, died suddenly on Sunday of COVID-19 complications, his family said. The lawmaker was the first incumbent parliamentarian to die of the coronavirus.

The Japanese government is also making public health decisions in light of the rescheduled summer Olympics, slated for late July, 2021, which were originally planned in Tokyo for summer of 2020.

Earlier in December, the Japanese government announced that travelers from Britain and South Africa were required to quarantine for three days. Suga also suspended the government-subsidized travel campaign "Go To Travel," which was canceled through Jan. 11.

RELATED Giant squid washes ashore on the coast of Japan

In the United States, federal officials announced Friday that because of the new virus strain, air travelers from Britain would require a negative COVID test at least 72 hours before their flight.

World News // 35 minutes ago
British chancellor unveils blueprint to turn around economy
LONDON, Jan. 27 (UPI) -- British Chancellor Jeremy Hunt laid out his vision Friday to restore stability to an economy reeling from hammer blows dealt by the pandemic, the financial crisis and the international energy crisis.

World News // 7 hours ago
ICC will reopen investigation into Philippines' deadly drug war
Jan. 27 (UPI) -- The International Criminal Court announced that it will resume its investigation into alleged crimes against humanity in the Philippines under former President Rodrigo Duterte's war on drugs.

World News // 22 hours ago
11 killed as Russia launches new missile strikes in Ukraine
Jan. 26 (UPI) -- Russia launched 55 missiles against Ukraine on Thursday, 47 of which were shot down by air defense, according to the Ukrainian Ministry of Defense. A total of 11 people were killed by strikes, emergency services said.

World News // 1 day ago
Toyota CEO Akio Toyoda to step down, move to board position
Jan. 26 (UPI) -- Toyota CEO and President Akio Toyoda will leave those roles April 1 and become chairman of the board. Toyota Chief Branding Officer Koji Sato will be the new CEO.
Advertisement