These programs, according to Pompeo, are conducted under the Mutual Educational and Cultural Exchange Act (MECEA), and allow U.S. government employees to travel using foreign government funds.

"While other programs funded under the auspices of the MECEA are mutually beneficial, the five programs in question are fully funded and operated by the PRC government as soft power propaganda tools," Pompeo wrote. "They provide carefully curated access to Chinese Communist Party officials, not to the Chinese people, who do not enjoy freedoms of speech and assembly. The United States welcomes the reciprocal and fair exchange of cultural programs with PRC officials and the Chinese people, but one-way programs such as these are not mutually beneficial."

Pompeo announced the change with less than two months left in President Donald Trump's administration, and amid strained relations between the two countries over trading practices and responses to the COVID-19 pandemic.

World News // 6 hours ago
South Korean economy grows in fourth quarter, ends year down 1%
SEOUL, Jan. 26 (UPI) -- South Korea's GDP shrank by 1% in 2020 on fallout from the COVID-19 pandemic, the Bank of Korea announced on Tuesday, marking the worst growth in more than two decades but pointing toward a rebound in 2021.

World News // 21 hours ago
10 missing at collapsed China gold mine confirmed dead
Jan. 25 (UPI) -- The remaining 10 gold miners who became trapped and unaccounted for following two explosions a couple weeks ago were confirmed dead on Monday. 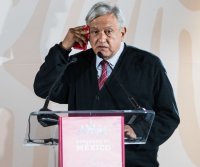