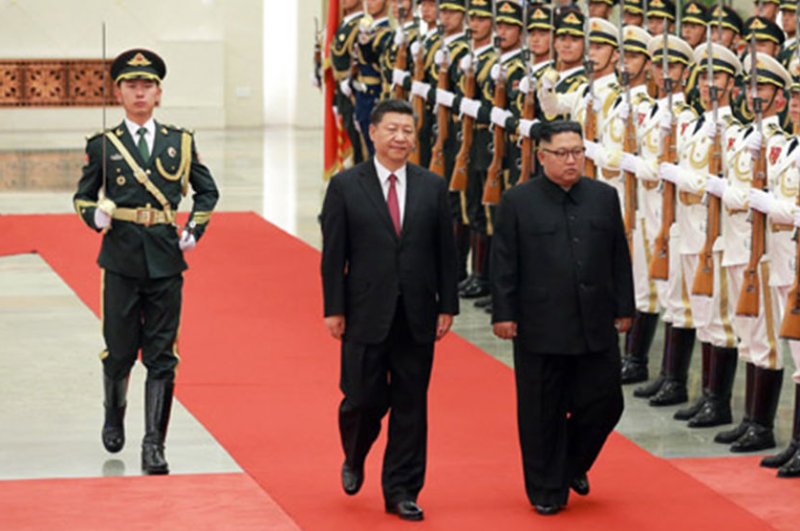 NEW YORK, Nov. 20 (UPI) -- The United States' policy of "maximum pressure" against North Korea was working in 2018 until Chinese leader Xi Jinping began to meet with Kim Jong Un and influenced his most important decisions, a U.S. analyst said.

Joseph Bosco, a senior fellow at the Institute for Corean-American Studies in Washington, said Friday at a virtual forum convened by the Global Peace Foundation and other NGOs that President Donald Trump's policy toward North Korea changed dramatically, as Xi drew Kim into his sphere of influence.

Before the summit, North Korea was feeling the heat after a year of warnings from Trump that included threats of "fire and fury." The president also said he was keeping "all options on the table" if Pyongyang threatened the United States with nuclear-armed missiles.

According to Bosco, the three components of the Trump administration's maximum pressure -- economic sanctions, the danger of a U.S. military attack, and the threat of North Korean regime change -- may have convinced Kim to make some changes.

"Pyongyang could see the handwriting on the wall," the analyst said. Kim signaled a "readiness to talk" by sending his sister Kim Yo Jong to the 2018 Pyeongchang Winter Olympics in the South in February.

Bosco said China's influence over Kim likely grew after the first U.S.-North Korea summit in Singapore, when Kim "agreed in theory" to denuclearization, leaving Trump the impression a major deal was at hand.

But by February 2019, when Trump met Kim for their second official summit in Vietnam, Kim's position had hardened.

"What happened was China and Xi's intervention," Bosco said.

According to the analyst, Beijing may not entirely support North Korea denuclearization. Bosco said China has been involved in initial North Korean efforts to access Abdul Qadeer Khan's nuclear network in Pakistan.

Huiyao Wang, president of the Center for China and Globalization, a think tank in Beijing, said Friday at the forum it is in China's best interest that the two Koreas unify and tensions recede on the peninsula.

China and Korea have a 2,000-year-old relationship and history shows a stable situation on the peninsula has benefited China, Wang said.

North Korea's natural resources, including rare earths, are estimated to be worth $10 trillion, and a unified Korea would be an "economic powerhouse" of more than 70 million people with a $2 trillion economy, Wang said.

John Everard, the former top British envoy to North Korea from 2006 to 2008, said at the online meeting that South Korean opinion indicates deep skepticism about the benefits of a unified peninsula.

"This is a battle we are losing," Everard said. Attitudes indicate South Koreans support unification, but the attitude, "Not with my money, not in my lifetime," remains.

"Until we win the hearts and minds of the South Korean people we are not going to go anywhere," the former ambassador said, adding that North Korean enthusiasm is greater because North Koreans think unification mean they would have access to South Korean standards of living.

U.S. President-elect Joe Biden, who is to be sworn into office in two months, is likely to bring a new approach to the Koreas.

Wang, who said he hopes the United States will reassert its traditional leadership role under Biden, said the new administration promises a return to an old normal in U.S.-China relations after an era of confrontation.

"We could probably have a new start," he said.

World News // 6 hours ago
More than 100 Nigerian farmers killed in suspected terrorist attack
Nov. 30 (UPI) -- At least 110 civilian farmers have been killed and many others wounded while harvesting crops in an apparent terrorist attack in Nigeria's northeastern Borno State, United Nations officials said. 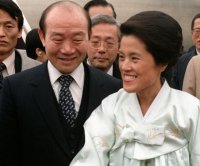 World News // 7 hours ago
Ex-South Korea dictator receives suspended sentence for libel
Nov. 30 (UPI) -- A South Korean dictator in power during the 1980 Gwangju Uprising has been sentenced to prison for eight months for defaming a Roman Catholic priest.

World News // 8 hours ago
4 officers charged in Paris beating
Nov. 30 (UPI) -- Four French police officers connected with the brutal beating of a Black music producer for not wearing a face mask have been charged in connection with the incident.