Lebanese police officers check vehicle license plates at a checkpoint in Beirut, Lebanon, on Saturday as a new lockdown went into effect. Photo by Wael Hamzeh/EPA-EFE

A Beirut, Lebanon, street is sparsely populated on Sunday, the day after a new lockdown went into effect to combat the coronavirus. Photo by Dalal Saoud/UPI

BEIRUT, Lebanon, Nov. 19 (UPI) -- Lebanon's government is fighting a surge of COVID-19 cases amid a shortage of medical staff and equipment with a new two-week lockdown. But many people, desperate to earn money for food, are not staying home.

Restrictions were largely observed when they started on Saturday, with a 24-hour general curfew imposed Sunday that left the streets nearly deserted and most people staying indoors.

But by Monday, many who were not allowed to drive on that day were circulating in their cars while others were working in their shops behind closed doors. Police have issued 15,116 tickets for violations. About 85 percent of the population has been following restrictions.

"If we close, who is going to feed us?" Afif, a 29-year-old father of three who works at a linen store in Beirut's Tarik al Jadide neighborhood, told UPI.

"If I don't work, I don't get paid and so I can't bring food to my family. The store owner is doing his best to support his employees, but what can he do more with the disastrous economic conditions?"

Afif, who spoke on the condition his last name be withheld, said "health comes first" and he is wearing a face mask and practicing social distancing. But, he said, "There is also a reality...many cannot even afford to buy a bundle of bread."

A parcel of bread is going for 1,500 Lebanese pounds ($1 at official rate and 25 cents at the black market rate).

Lebanon reported Wednesday more than 110,037 cases of coronavirus and 852 deaths since the virus was first detected in February. When daily cases reached more than 1,922 on Nov. 11, the government decided to impose the new lockdown.

The pandemic arrived amid a devastating economic crisis, with poverty and unemployment on the rise -- misery further exacerbated by an Aug. 4 explosion at the Beirut port that destroyed a third of the city and left 300,000 homeless.

Under the first one-month lockdown at the end of March, the Beirut government distributed a one-time cash assistance of 400,000 Lebanese pounds (about $150 at then-market rates) to the poorest families.

Aware of its limited resources and a dying private sector, the caretaker government of Prime Minister Hassan Diab opted for a two-week lockdown this time instead of the six weeks recommended by the World Health Organization in Lebanon.

Healthcare services, banks, factories, the judiciary, supermarkets and food stores are exempted from restrictions, while shops, restaurants, cafes, gyms, bars and nightclubs were ordered to close. A 5 p.m. to 5 a.m. curfew was imposed and driving was banned on Sundays while odd-even license plate rule was applied. Cars with license plates that end with an odd number are allowed to circulate on Mondays, Wednesdays and Fridays while those with license plates ending with an even number on Tuesdays, Thursdays and Saturdays.

"We need to persevere, as we don't have other options but to restrict activity. The situation is extremely worrisome," Dr. Firas Abiad, director of the government-run Rafik Hariri University hospital in Beirut, told UPI. "Coronavirus is spreading, registering 15% positivity rate."

Just before the lockdown was ordered, the hospital could no longer admit patients transferred from others because it was at capacity. Even the emergency room was full.

"The virus is moving faster," Abiad said, adding that the lockdown would "allow us to stay one step ahead" and avoid "unnecessary deaths."

The reopening of the Beirut Airport on July 1 should have been managed better, he said, by imposing proper quarantine measures and following up on passengers, especially those from Africa, Iran and Italy, who tested positive.

The port explosion might have contributed to a spike in coronavirus cases because of urgent rescue operations and resulting chaos "but not as much as we have feared," Abiad said.

"What the explosion did was to put a bigger strain on the medical sector with a number of hospitals destroyed and put out of service," he said.

Even before the port blast, Lebanon's hospitals were strained by the economic crisis, forced to dismiss several doctors and nurses. On Monday, the caretaker health and finance ministers promised to cover unpaid bills amounting to 480 billion Lebanese pounds that have been accumulating since 2012.

"This is a whiff of oxygen so that we don't drown," Suleiman Haroun, president of the Syndicate of Private Hospitals, told UPI. "We are facing a very bad and difficult situation...We are trying as much as we can to keep operating with what's available."

"We have a big shortage in the medical staff to treat coronavirus patients...we have to rehire those who were previously dismissed because of the financial crisis but many had already left the country," Haroun said.

The hospitals are in need of artificial respirators and only few of them are able to pay for them in cash -- $20,000 per unit -- due to banking restrictions on international transfers and withdrawals limited to specific monthly amounts in Lebanese pounds.

Meanwhile, the lockdown is expected to bring another economic blow to the private sector.

The president of Lebanon's Socio-Economic Council, Charles Arbid, told UPI the losses under the new lockdown could range from $750 million to $1 billion.

"When you are locked down, you just eat; you don't even pay for gasoline," Arbid said. "This is very, very hard on restaurants, merchants, trade and tourism. The question is whether we are going to open again in December."

Another closure, he said, will be "very harmful," with Christmas and New Year festivities usually constituting 20 percent of the economic activities.

"My real concern is poverty...We are going from poverty to misery," said Arbid, expressing concerns that people have lost purchasing power, a growing number of people are emigrating and more small businesses are closing.

However, he remained hopeful.

If a new cabinet is formed, a rescue plan is worked out with the International Monetary Fund and $1 billion is pumped in to compensate those who lost their houses and businesses in the port explosion, the relaunching of the country's economy could begin. 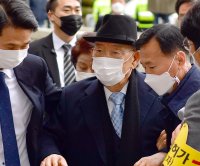 World News // 10 hours ago
LG strives to build general-purpose AI
SEOUL, May 18 (UPI) -- LG AI Research announced plans to spend more than $100 million over the next three years to create a general-purpose artificial neural network, which it calls "mega-scale" AI.