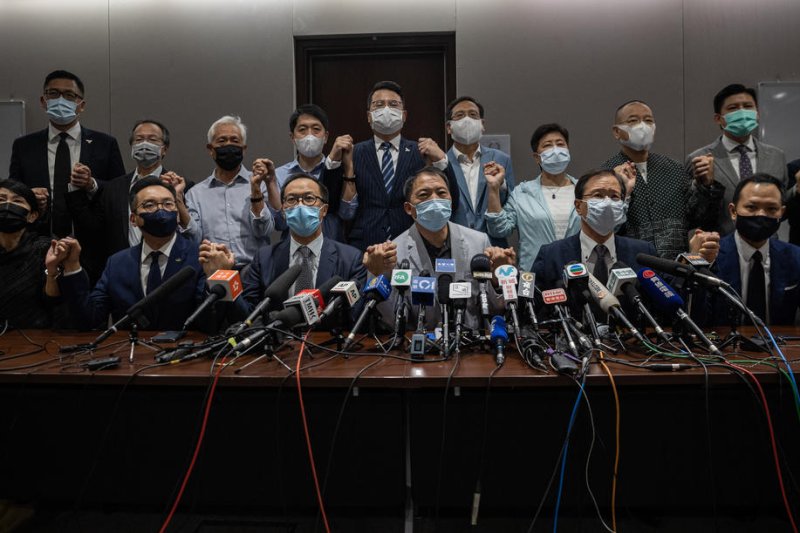 Pan-democratic lawmakers announced their resignation from the Legislative Council in Hong Kong, China, on November 11. Photo by Jerome Favre/EPA-EFE

"We urge the Chinese central authorities to reconsider their actions against Hong Kong's elected legislature and immediately reinstate the Legislative Council members," said the statement from U.S. Secretary of State Mike Pompeo and the foreign ministers of Australia, Britain, Canada and New Zealand.

"For the sake of Hong Kong's stability and prosperity, it is essential that China and the Hong Kong authorities respect the channels for the poll of Hong Kong to express their legitimate concerns and opinions," it said.

The statement was issued after Hong Kong disqualified four pro-democracy lawmakers under a new law that allows for the removal of officials who have promoted independence or participated in "unpatriotic" acts.

Following the removal, the 15 pro-democracy lawmakers remaining in Hong Kong's Legislative Council resigned in protest, raising the ire of China who described the move as a challenge to its authority.

The five foreign ministry heads said the new law on top of the Hong Kong government's decision in July to postpone parliamentary elections and the arrests of several elected legislators "appear part of a concerted campaign to silence all critical voices."

They said that China's action "is a clear breach" of the Sino-British Joint Declaration, which returned Hong Kong to Chinese sovereignty from London in 1997 under the condition that it maintain the region's high degree of autonomy for at least 50 years.

China has yet to comment on the declaration, but it has repeatedly demanded other nations, especially the United States, who have commented on its treatment of Hong Kong to stop interfering with its internal affairs.

The implementation of the new law last week by China comes in the wake of its implementation of a draconian national security law on Hong Kong that attracted widespread condemnation from Western nations and rights groups.

World News // 7 hours ago
At least 11 dead, 98 injured in Egypt train crash
April 18 (UPI) -- Egypt's Ministry of Health and Population said at least 11 people died and 98 more were injured after a train derailed near the city of Toukh, north of Cairo on Sunday.