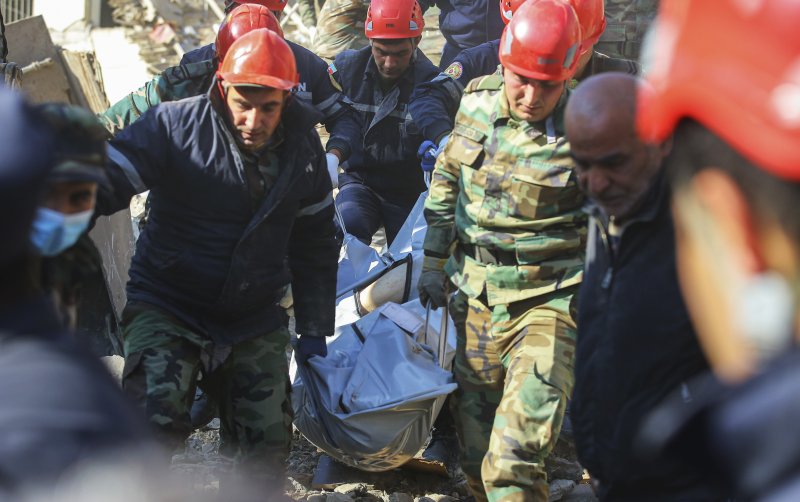 Azerbaijan rescuers on Sunday carry the body of a local resident allegedly killed by overnight shelling in Ganja, Azerbaijan. Photo by Aziz Karimov/EPA-EFE

In a statement on Sunday, Azerbaijan's Ministry of Foreign Affairs said Armenia shelled its second-largest city of Ganja, accusing it of deliberately attacking civilians and medical workers "as part of its aggressive policy against Azerbaijan."

"The shelling of civilians and cities by the Armenian armed forces after the humanitarian cease-fire agreement is another clear example of barbarism and shows that the cease-fire calls on the Armenian leadership are nothing but hypocrisy," the ministry said.

Azerbaijani President Ilham Aliyev called the shelling "a war crime and a gross violation of the Geneva Conventions."

"It is a disrespect to the negotiations under Russia's mediation and another embodiment of Armenian fascism," he said in a tweet. "These heinous actions can never break the will of the Azerbaijani people!"

Turkey, a close Azerbaijani alley, on Sunday condemned the attack, while calling on the international community to "stop this lawlessness."

Azerbaijan's Ministry of Defense on Sunday accused Armenia's armed forces of also shelling the city of Mingachevir and villages in the regions of Goranboy, Aghdam, Terter, Agjabedi, Fizuli and Jabrayil.

"The political and military leadership of Armenia bears the responsibility for the aggravation of the situation in the region," the Ministry of Defense said in a statement.

The shelling occurred less than a day after the two sides agreed to a Russia-mediated cease-fire to stop fighting over control of the Nagorno-Karabakh territory, which is administered by ethnic Armenians but is located within Azerbaijan. Its control has been a source of disagreement between the two nations since the Soviet Union dissolved in the early 1990s.

Within hours of the cease-fire taking effect at noon on Saturday, each side accused the other of breaching it.

Josep Borrell, the high representative of the EU, voiced worry in a statement Sunday over the accusations, urging both sides and "external parties" to adhere to the agreement.

"We note with extreme concern the reports of continued military activities, including against civilian targets, as well as civilian casualties and urge the sides to ensure full respect of the agreement on the ground," Borrell said. "The EU calls upon the sides to engage in substantive negotiations without delay."

The two countries have been involved in fighting since Sept. 27, with Armenia calling for the Nagorno-Karabakh territory to be recognized internationally as an independent state but Azerbaijan accuses it of wanting to seize more land.

Coronavirus cases in world rising by 1 million every three days

World News // 8 hours ago
Russian rockets target apartment buildings in Donbas; death toll in mall attack rises
June 29 (UPI) -- Amid a key NATO summit in Spain on Wednesday, Ukrainian forces dug into Lysychansk in an effort to buy time to be resupplied with weapons from the defensive alliance in the latest round of fighting.

World News // 23 hours ago
Turkey agrees to let Sweden and Finland join NATO
June 28 (UPI) -- NATO Secretary-General Jens Stoltenberg said Tuesday that the military alliance has reached a deal to admit Sweden and Finland after Turkey, a previous holdout, agreed to it.

World News // 21 hours ago
Chlorine gas leak in Jordan kills at least 13, injures hundreds
June 28 (UPI) -- A chlorine gas leak at Jordan's port of Aqaba killed at least 13 people and injured 260 others. Investigators said a crane malfunction caused a chlorine tank to fall as it was being loaded, releasing the toxic gas.

World News // 1 day ago
Russia sanctions first lady Jill Biden, daughter among 25 Americans
June 28 (UPI) -- First Lady Jill Biden and her daughter Ashley Biden are two of the 25 Americans covered by Russia's latest round of sanctions, barring them from entering the country, the Russian Foreign Ministry said in a statement.
Advertisement