A replica of the Amber Room is seen in the Catherine Palace on July 13 near St. Petersburg, Russia. File Photo by Anatoly Maltsev/EPA-EFE

Oct. 1 (UPI) -- Polish divers said Thursday they have located a Nazi shipwreck from World War II that may help solve a 75-year-old mystery -- the location of the fabled Russian Amber Room.

The Nazis raided the Amber Room in 1941 near St. Petersburg, which was part of the Catherine Palace for three centuries.

The amber and gold artifacts taken from the room were last seen in the Russian Baltic port city of Kaliningrad four years later. At the time, it was called Koenigsberg and considered part of Germany.

The German steamship Karlsruhe left the city in 1945 with a heavy load of cargo, but never arrived at its destination. It was sunk by Soviet warplanes near the coast of Poland.

Divers from the Baltictech Group now believe they have found the Karlsruhe wreckage, and possibly the legendary Russian room.

"It was in Koenigsberg that the Amber Room was seen for the last time," Baltictech diver Tomasz Stachura said. "From there, the Karlsruhe left on its last voyage with a large cargo."

Tomasz Zwara, another member of the dive team, said much of the historical data suggests the Nazi ship left with the stolen treasures from the Amber Room.

"The history and available documentation show that the Karlsruhe was leaving the port in a great hurry and with a large load," he said. "All this put together stimulates the imagination.

"Finding the German steamer and the crates with contents as yet unknown resting on the bottom of the Baltic Sea may be significant for the whole story."

It wasn't initially known when divers might further explore the shipwreck site. The Russian government said in 2008 they would demand the return of the Amber Room if it is eventually found.

The Amber Room was given to Russian Czar Peter the Great in 1716 as a gift. Over the years, there have been many attempts to find the storied room. A U.S. explorer in the early 1990s suspected it might have been located beneath the German city of Weimar.

During World War II, the Nazis took the room apart and shipped it to Koenigsberg, where it disappeared during British bombing raids on the city, Marine Technology News reported. Many believe it was destroyed.

A replica Amber Room has since been built in the Catherine Palace. 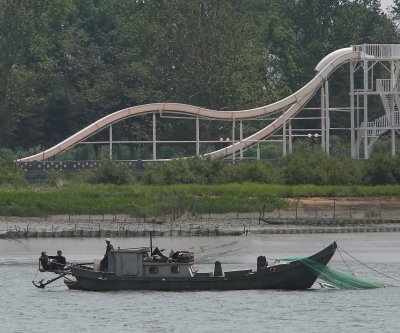