Honduras to move embassy to Jerusalem before end of 2020

The city of Jerusalem, Israel, is seen virtually empty on Saturday due to coronavirus restrictions. Honduras plans to move its embassy into the city by the end of the year. Photo by Debbie Hill/UPI | License Photo

Sept. 21 (UPI) -- Honduras is planning to move its Israeli embassy from Tel Aviv to Jerusalem, following the United States and other nations that have done so recently.

Honduran President Orlando Hernandez said he expects the move to be made by the end of the year. In response, Israel says it plans to open an embassy in the Honduran capital of Tegucigalpa.

"We hope to take this historic step before the end of the year, as long as the pandemic allows it," Hernandez tweeted.

"I look forward to working with you to strengthen the friendship between Israel and Honduras and to the opening of your embassy in Jerusalem and ours in Tegucigalpa," Israeli Prime Minister Benjamin Netanyahu added in a tweet.

Mattanya Cohen, Israel's ambassador to Honduras and Guatemala, said Monday they were able to overcome Palestinian opposition to the move.

"They told me there's no chance that Honduras will move its embassy because there is a large Palestinian community there," Cohen said. "I didn't give up. We started with quiet contacts behind the scenes, with ministers, with parliament members, and the community."

World News // 1 hour ago
China denies wrongdoing, confrontation after Blinken speech
March 4 (UPI) -- China denied it is engaged in a confrontation with the United States after remarks from U.S. Secretary of State Antony Blinken. 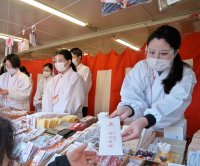