A U.S. attorney in China who served on the board of China's ZTE Corp. is to be deported following charges of sexual assault. File Photo by Stephen Shaver/UPI | License Photo

Sept. 17 (UPI) -- Chinese authorities have decided to deport a U.S. attorney for violating local laws in connection to the alleged rape of his "foster daughter."

Bao Yuming, an American lawyer originally from Tianjin, China, and licensed to practice law in both countries, was accused of infractions related to charges of sexual assault, Xinhua news agency reported Thursday. The charges remain unproven, according to the report.

The decision to deport Bao complies with China's immigration control act, the Yantai Public Security Bureau in Shandong Province said. The charges are serious and the Beijing Judicial Bureau has decided to revoke his license, Chinese public security said in its official statement.

"We conducted a full in-depth investigation [on the matter], but the current evidence has not been sufficient to prove Mr. Bao's actions constituted sexual assault," Chinese agencies said in statement.

China is moving forward with Bao's deportation after local media claimed the lawyer, a highly sought after attorney who served on the board of major firms including ZTE Corp., had repeatedly raped an adoptee from 2016 to 2019. The alleged victim was 14 when Bao adopted her in October 2015, local media reported.

On Thursday, Chinese authorities said Bao's adoptee was 18 at the time of adoption, not 14, and that she was technically not a minor when the two met.

ZTE is one of a handful of Chinese companies banned by the United States. The Hong Kong Economic Times reported Thursday direct foreign investment between the United States and China fell 16.2% in the first half 2020, citing the latest data from the Rhodium Group, a U.S. research provider.

The decline reflects a nine-year low in two-way capital flow, with Tencent's $3.4 billion purchase of a minority stake in Universal Music Group the only outlier in Chinese FDI in the United States, the Rhodium Group said.

World News // 55 minutes ago
More than 100 Nigerian farmers killed in suspected terrorist attack
Nov. 30 (UPI) -- At least 110 civilian farmers have been killed and many others wounded while harvesting crops in an apparent terrorist attack in Nigeria's northeastern Borno State, United Nations officials said. 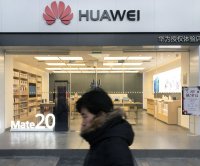 World News // 9 hours ago
Australia demands China apologize for 'repugnant' Twitter post
Nov. 29 (UPI) -- Australia has demanded China apologize for posting a "repugnant" and "offensive" doctored image on Twitter of an Australian soldier threatening the life of an Afghan child as relations between the countries fray.