Aug. 29 (UPI) -- The Italian coast guard came to the aid of a Banksy-funded rescue ship in the Mediterranean Sea on Saturday after it pulled more than 200 people from the water and became overloaded.

The ship, named the Louise Michel, said it was in a "state of emergency" after rescuing 89 migrants earlier in the week. It picked up an additional 130 on Friday, bringing the total number of passengers to 219 with 10 crew members.

One passenger died and many had fuel burns or were dehydrated.

The crew of the vessel called for assistance from the Italian and Maltese coast guards.

"#LouiseMichel is unable to move, she is no longer the master of her manoeuver, due to her overcrowded deck and a liferaft deployed at her side, but above all due to Europe ignoring our emergency calls for immediate assistance. The responsible authorities remain unresponsive," the ship's Twitter account said Friday.

By Saturday afternoon, though, the Italian coast guard transferred "49 of the most vulnerable survivors," the Louise Michel said.

British street artist Banksy funded the ship, which is a former French navy vessel, to assist migrants attempting to cross the Mediterranean Sea from North Africa and the Middle East to Europe. It's splashed with bright pink paint and features reproductions of the artist's famous artworks, including one of a girl holding a heart-shaped life preserver. The vessel is named after a 19th century French feminist anarchist.

More than 40,000 migrants have made the trek to Europe across the Mediterranean Sea since January, most from Tunisia, Algeria, Afghanistan, Syria and other Middle Eastern and North African countries. This year, 443 people have died attempting the trip, according to data from the U.N. High Commissioner for Refugees.

This year is on track to have the fewest number of crossings since 2014, when the refugee crisis began in the region. Migration peaked in 2015, when 1.03 million people crossed the Mediterranean and 3,771 died. More than 5,000 died in 2016 despite about one-third the number of crossings from the previous year.

The Louise-Michel said some of the migrants it rescued were from Libya, where dueling governments are fighting for control.

World News // 4 hours ago
Iran says it will resume nuclear talks
Oct. 27 (UPI) -- Iran will resume talks on its nuclear program in November, the country's top nuclear negotiator said Wednesday, but it's unclear if the United States will participate.

World News // 12 hours ago
India Supreme Court orders panel to investigate Pegasus spyware scandal
Oct. 27 (UPI) -- India's Supreme Court created an independent committee on Wednesday to investigate accusations that spyware that was sold to the government was used to illegally monitor the phones of lawmakers and activists. 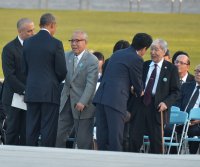 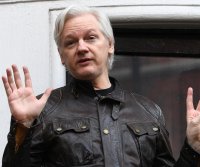 World News // 19 hours ago
PM Abdalla Hamdok, wife released under 'heavy guard' after Sudan coup
Oct. 27 (UPI) -- Sudanese Prime Minister Abdalla Hamdok and his wife have been released following their arrests on Monday by the military in a coup.