Dolphin die-offs on the rise in Mauritius following oil spill

A man holds open the mouth of a dead Melon-headed whale on Thursday. Marine animals including dolphins, fish and crabs have been found dead following an oil spill involving a Japanese-owned ship off the coast of Mauritius. File Photo by Laura Morosoli/EPA-EFE

As many as 18 dolphins have been found dead along the coast of the island country, prompting calls for an investigation, Al Jazeera reported.

"This is a deeply sad and alarming day for the people of Mauritius," said Happy Khambule, the senior climate and energy campaign manager for Greenpeace Africa, on Wednesday.

"Greenpeace appeals to the authorities to carry out a swift, transparent and public autopsy on the bodies collected."

The ship MV Wakashio, was carrying about 3,800 tons of fuel oil when it ran aground. The vessel struck coral reef on the southeast coast of Mauritius on July 25.

Opinion is divided over whether the oil spill is responsible for the deaths of the dolphins.

Mauritius' fisheries minister said that "at first glance" the deaths appear to be unconnected to the oil, the BBC reported.

Oceanographer Vassen Kauppaymuthoo, who works with coastal fishing communities to prepare for climate change, said the dolphins smelled of fuel.

"In my opinion, this situation will continue to deteriorate as time goes on," Kauppaymuthoo said, according to local media in Mauritius.

Residents of Mauritius say they are devastated by the news of the dead dolphins. Fish and crabs have also been discovered dead by locals.

"Waking up this morning to witness so many dead dolphins on our seashore is worse than a nightmare," said Nitin Jeeha, according to the BBC. "I have seen around eight to 10 dead dolphins. Are there more in the lagoon?"

World News // 2 hours ago
South Korea's 'comfort women' file appeal after court loss
May 6 (UPI) -- A dozen former "comfort women" who lost their case in a South Korean court last month are appealing the decision, according to local lawyers and activists. 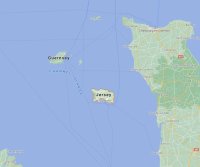 World News // 10 hours ago
Britain sends patrol ships to English Channel island amid fishery tensions with France
May 6 (UPI) -- The British government said it dispatched two Royal Navy patrol ships to Jersey as tensions over fisheries between the self-governing island and France climb.