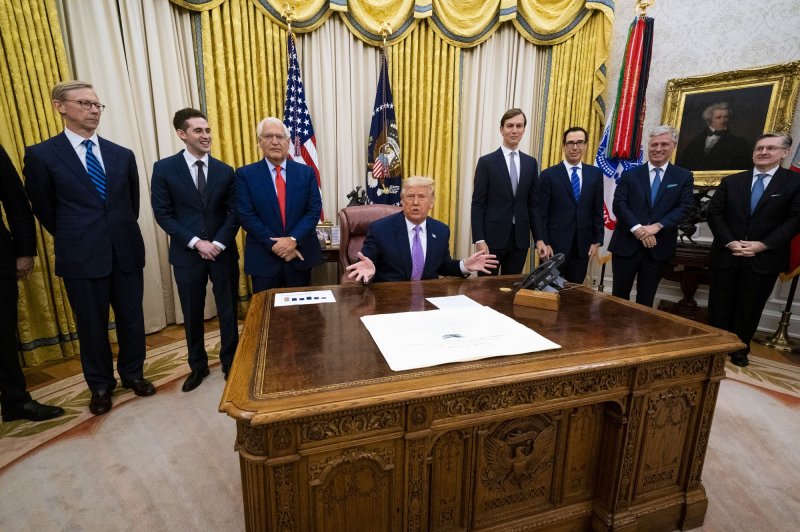 Aug. 13 (UPI) -- Israel and the United Arab Emirates agreed Thursday to full normalization of relations, with Israel suspending its efforts to annex parts of the West Bank.

A White House statement said the agreement will "advance peace in the Middle East region and is a testament to the bold diplomacy and vision of the three leaders and the courage of the United Arab Emirates and Israel to chart a new path that will unlock the great potential in the region."

Tucked into the announcement was an agreement that Israel will "suspend" West Bank annexation, which was part of Trump's Middle East peace plan. Netanyahu had campaigned during Israeli elections on annexing portions of the West Bank.

The announcement said the countries will focus on "expanding ties with other countries in the Arab and Muslim world. The United States, Israel and the United Arab Emirates are confident that additional diplomatic breakthroughs with other nations are possible, and will work together to achieve this goal."

Last month, Netanyahu held off on starting the process of annexing 30% of the West Bank and many major Jewish settlements under Israeli sovereignty. Palestinians had long denounced any plans to annex the West Bank and called for a state of its own based on boundary lines in 1967.

World News // 4 hours ago
After record heat this summer, agency declares droughts in much of Britain
Aug. 12 (UPI) -- Following weeks of hot temperatures -- some of them record temps -- officials declared droughts in several areas of Britain on Friday, including the entire eastern portion of England.

World News // 5 hours ago
Russia keeps up attacks near Ukraine nuclear plant despite serious warnings from U.N. leaders
Aug. 12 (UPI) -- Russian attacks on Friday again included targets near the Zaporizhzhia nuclear power plant in southeastern Ukraine, pressing concerns about the security of the facility and drawing a warning from a top nuclear watchdog.

World News // 14 hours ago
Western nations pledge $1.5B in military aid to Ukraine
Aug. 11 (UPI) -- The defense ministers and representatives from 26 democratic nations met Thursday in Copenhagen where they collectively pledged more than $1.5 billion in military support for Ukraine.

World News // 17 hours ago
Source of London's Thames River runs dry amid prolonged heat
Aug. 11 (UPI) -- Extended hot and dry temperatures across Britain and much of Europe have caused the source of London's River Thames to dry up for the first time since 1976.