The Chinese statement comes after the Trump administration and South Korean President Moon Jae-in have repeatedly expressed a commitment to talks on denuclearization. North Korea has yet to respond to those offers of dialogue, however.

"The current peace process on the Korean Peninsula is in a challenging phase," Wang said. "That North Korea's reasonable concerns are not being respected is the main issue."

"With our reliable and effective self-defense of a nuclear deterrent, there will be no more wars on this territory, and our country's security and future will be forever guaranteed," Kim said on the day North Korea refers to as the day of "victory in the fatherland liberation war."

Kim also said the 1950-53 Korean War, which ended in a truce, was an event of "pain and grief" that must not be repeated.

North Korea has overcome "all kinds of pressure and challenges to walk the path of a self-developed nuclear power," Kim said.

The North Korean leader also referred to the United States and its allies as "imperialists" with "bestial characteristics," without mentioning those countries by name.

China was referred to as a true friend who deserves tribute, however.

Chinese authorities have been instrumental in the forced repatriation of North Korean defectors, the majority of them who are women.

On Tuesday, the United Nations High Commissioner for Refugees said the defectors are beaten, detained under unsanitary conditions and suffer from malnutrition in North Korea after being returned from China.

World News // 18 hours ago
Hyundai acknowledges coolant leak in Ioniq 5
SEOUL, June 18 (UPI) -- Hyundai is under fire from customer complaints that the Ioniq 5 leaks coolant within the first months of usage.

World News // 23 hours ago
European Union reopens to American travelers
June 18 (UPI) -- The European Council on Friday announced that countries in the European Union could gradually lift travel restrictions on several nations, including the United States. 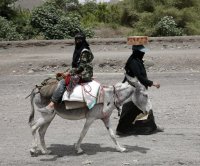