Cybersecurity firm Recorded Future said Chinese state-sponsored hackers have since May been infiltrating the Vatican ahead of anticipated negotiations between the Holy See and Beijing. Pool photo by Gennari/Pool/Spaziani/UPI | License Photo

July 28 (UPI) -- Chinese hackers have infiltrated the Vatican ahead of an anticipated negotiation over a 2018 deal that saw China gain more control over the Catholic church in the Asian country, a private cybersecurity firm said Tuesday.

Recorded Future said in a report that from early May, Chinese-state sponsored cybersecurity threat RedDelta has targeted the Vatican, the Catholic Diocese of Hong Kong, the Hong Kong Study Mission to China and the Pontifical Institute for Foreign Missions in Italy.

The attacks occur months ahead of the anticipated September renegotiation of a controversial 2018 deal between the two sides that saw Pope Francis recognize seven Chinese bishops appointed by Beijing in exchange for greater influence over future appointments.

"The suspected intrusion into the Vatican would offer RedDelta insight into the negotiating position of the Holy See ahead of the deal's September 2020 renewal," an executive summary of Recorded Future's report said.

The cybersecurity firm said the attacks suggest the Chinese Communist Party is furthering its attempts to consolidate control over so-called under underground religions while "diminishing" the influence of the Vatican within China's Catholic community.

Beijing, which only recognizes the five religions of Buddhism, Catholicism, Daoism, Islam and Protestantism, has been pursuing the objective of the "sinicization of religion" in an attempt to gain more influence over them. Zhang Yijiong, the executive deputy head of the CCP that oversees religion, said in 2017 that the party has placed "socialist core values" in a leading role in religion.

In June, U.S. Secretary of State Mike Pompeo condemned China for its "decades-long war on faith," stating the CCP's efforts to repress all religious "continues to intensify."

"The Chinese Communist Party is now ordering religious organizations to obey CPP leadership and infuse communist dogma into their teachings and practice of their faith," he told reporters in Washington, D.C.

Recorded Future said there is evidence that RedDelta has had access to the Vatican until at least July 21. It said one attack included a document delivered to the current head of the Hong Kong Study Mission to China, essentially the Vatican's representative in the Asian nation.

It is unclear if the document, a letter of condolence over the death of a Chinese Catholic bishop, was fabricated or was real but "weaponized," it said.

RELATED Iran's mullahs clutching at straws in deal with China

The targeting of the Hong Kong representative could also provide China with information not only on its relations with the Vatican but also on its views of Hong Kong's pro-democracy protests, which have gained widespread international support, it said.

The U.S. cybersecurity firm concluded that attacks were conducted by the Chinese state-sponsored group due to its "targeting of organizations that heavily align to Chinese strategic interests" as well as its uses of tools that have been used by China-based groups.

The report comes amid escalating tensions between China and the United States that most recently saw both countries order the other to close consulates in the past week.

The United States has increasingly taken a strong hand with Beijing, particularly over its human rights abuses committed against Hong Kong and its Uyghur Mulsim population in the Xinjiang region, imposing legislation punishing it for its transgressions.

China has repeatedly denied the accusations, demanding the United States to stop meddling in its internal affairs and threatening retaliatory actions. 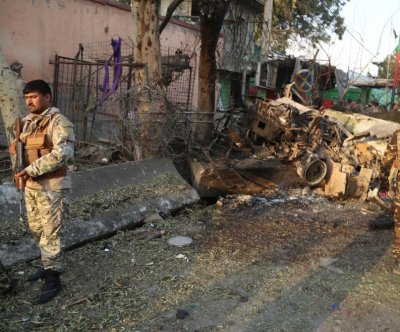 World News // 55 minutes ago
Nearly 30 dead in militant attack at Afghan prison
Aug. 3 (UPI) -- Nearly 30 people were killed and 50 injured when militants attacked a prison in Jalalabad, Afghanistan, leading to an 18-hour battle. Hundreds of prisoners escaped, but most were recaptured.

World News // 2 hours ago
Work starts on restoration of Notre Dame Cathedral's grand organ
Aug. 3 (UPI) -- Restoration work on the 250-year-old grand organ at the fire-damaged Cathedral of Notre Dame began Monday in Paris with hopes of having it ready in time for the church's planned reopening in 2024.

World News // 5 hours ago
Northern Irish political leader, Nobel Laureate John Hume dies at 83
Aug. 3 (UPI) -- John Hume, a winner of the Nobel Peace Prize and widely acknowledged as an architect of the Good Friday Agreement that helped bring peace to Northern Ireland, died Monday, his family said. He was 83.

World News // 5 hours ago
South Korea, New Zealand spar over diplomat in sex harassment case
Aug. 3 (UPI) -- South Korea and New Zealand are at odds over the case of a South Korean diplomat who has been accused of groping a New Zealand staff member at Seoul's Embassy in Wellington.