An Indian boy walks in a deserted road during the weekend lockdown in Noida, Uttar Pradesh, India, on Saturday. The Uttar Pradesh government imposed a lockdown and ordered extremely more testing after a review of the present situation of coronavirus. Photo by Harish Tyago/EPA-EFE

July 26 (UPI) -- Since the first death from coronavirus was reported more than 6 months ago in mainland China, the toll has grown past 650,000 deaths and 16.3 million cases but dominated now by four countries: the United States, Brazil, Mexico and India.

With 30% with the world's population of 7.8 billion, these three counties from the Western Hemisphere and one in Asia comprise 48 percent of the total deaths.

But in those nations the toll has been surging with 60% of the 5,689 deaths worldwide Saturday attributed to them and 2,452 for Sunday, according to tracking by Worldometers.info.

The United States has been the world leader for months and now is nearing world-high 150,000 deaths and has passed 4.3 million cases. Brazil has risen to second place in both categories: 87,052 deaths and 2.4 million cases. Farther north, Mexico recently climbed into fourth place with 43,680 deaths as well as more than 390,000 cases. And India last week rose to sixth with 32,812 deaths and 1.4 million cases, which is the third highest.

And China, the original epicenter, has slid to 24th, not reporting a death since late April 26. The first death from the disease was announced on Jan. 11.

Brazil's President Jair Bolsonaro said Saturday that he tested negative for the virus after at least three other positive results since July 7. He has credited hydroxychloroquine for his quick recovery, an anti-malaria drug the Food and Drug Administration cautioned against using.

Bolsonaro, 65, has described the coronavirus as nothing more than "a little flu" and frequently has appeared in public, emphasizing economic matters as more important than health issues.

In Mexico, the nation reported 306 new deaths late Sunday, a significant drop from the 729 deaths reported Saturday and the 737 from the night before. Cases rose by 5m480.

Advertisement
RELATED Mothers with COVID-19 unlikely to pass it to newborns, study shows

On Thursday, the nation set a cases record with 8,438 while the positivity rate was 52%.

Elsewhere in Latin America, Peru reported 187 additional deaths on Saturday for ninth place and Chile 106 for 14th place. On Sunday, Chile posted 92 deaths for a total of 9,112.

North America's death toll is dominated by the United States and Mexico, which account for all but around 15,000 of its 208,264 deaths. Canada reported only 4 deaths on Saturday and 5 on Sunday for a total of 8,890.

The United States last week extended its travel ban with its neighbors through Aug. 20 after going into effect on March 21.

In Asia, India on Sunday reported 716 deaths and a record 50,525 cases after Saturday's 680 deaths, which was fourth highest in the world.

"The threat of coronavirus is far from being over," Prime Minister Narendra Modi said Sunday. "At many places, it is spreading fast. We need to be extra vigilant. We have to bear in mind that the coronavirus is as fatal today as it was in the beginning. That is why we have to be fully cautious."

When there were only 519 cases and 10 deaths, the nation went into lockdown.

With the second-largest population of 1.3 billion, the Asian nation's mortality rate is 2.3%. The worldwide figure is 4.0%.

Iran, which is 10th in the world for most deaths, reported 216 Sunday -- 13 fewer than the record set Tuesday.

China, which was the original epicenter of the virus, reported 61 cases on Monday and 46 on Sunday. Since June 1, cases have grown around 830 from 83,017.

But outside the mainland, Hong Kong has recorded 128 new coronavirus cases -- 103 locally transmitted and the rest imported -- in the past 24 hours, which is the fifth day in a row of more than 100 cases. The total is 2,634. In all, 18 have died, according to China's National Health Commission.

On Friday, Japan set a record with 927 cases.

North Korea announced its first case, a patient who illegally entered through Kaesong City on July 19 after defecting to South Korea three years ago, the state-run Korean Central News Agency reported. The patient has been quarantined along with everyone the individual has been in contact with recently.

Four nations from Europe are in the top 10. On Sunday, No. 3 Britain added 14 deaths and No. 5 Italy added 5 -- among the lowest since the pandemic began. The daily highs were 11,72 in Britain and 919 in Italy several months ago. No. 7 France and No. 8 Spain didn't report any data this weekend.

Earlier, Spain's health ministry reported a spike of more than 920 new cases on both Thursday and Friday, the highest numbers since early May. At the time the nation eased its lockdowns.

On Saturday, Britain imposed a 14-day quarantine on travelers returning from the country.

On Friday, Norway announced a 10-day quarantine for people returning from Spain, and France issued new travel warnings for the Catalonia region, where Barcelona and popular beaches are located.

Barcelona nightclubs have been ordered shut for two weeks and there is a midnight curfew on bars. In the western district of Segria, with 200,000 people, there is a partial lockdown.

"We must be able to take swift, decisive action," said Foreign Secretary Dominic Raab on Sky News on Sunday. "Otherwise we risk reinfection into the U.K., potentially a second wave and another lockdown."

Australia had its most deadly day Sunday, reporting 10 deaths for a total of 155. In one week, Australia's toll has increased by 55. On Monday, it reported 6 deaths and 532 new cases for a total of 14,935, by far the most in Oceania.

The deaths in Victoria, include the youngest ever, a man in his 40s.

"There is no reason for anybody to think that because they are otherwise fit or because they are not in their 80s, then somehow they have essentially got a vaccine for this," Premier Daniel Andrew said Sunday.

New Zealand's last fatality was on May 28 for a total of 22. It has the second-most cases in the region with 1,556, reporting single-digit increases since mid-April.

South Africa reported the fourth-most most additional cases in the world, 11,233, behind the United States, India and Brazil.

World News // 22 hours ago
Russia takes control of town of Svitlodarsk; 200 bodies found in Mariupol
May 24 (UPI) -- Ukrainian authorities said Tuesday they have discovered about 200 bodies beneath the debris of an apartment building in Mariupol, the southern port city that's been targeted for weeks by Russian forces.

World News // 14 hours ago
Dutch airline KLM faces suit over 'greenwashing'
May 24 (UPI) -- Environmental groups have filed suit against KLM, alleging the Dutch airline has falsely claimed to be environmentally sustainable in advertising to improve its image, which is greenwashing. 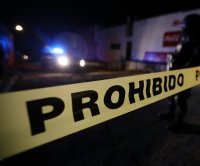 World News // 18 hours ago
Band of gunmen attack hotel, 2 bars in central Mexico; 11 killed
May 24 (UPI) -- Mexican police are searching for a group of gunmen who opened fire on a hotel and two bars late Monday, killing nearly a dozen people.

World News // 19 hours ago
Hong Kong cardinal denies failing to register fund that helped dissidents
May 24 (UPI) -- Cardinal Joseph Zen of Hong Kong, along with five other people, denied charges in court on Tuesday that they failed to register a relief fund that was assisting protestors who faced legal and medical fees.

World News // 22 hours ago
Biden, Quad leaders pledge 'free' Indo-Pacific amid 'dark hour' in Russia-Ukraine war
SEOUL, May 24 (UPI) -- U.S. President Joe Biden and his counterparts in the Quad met in Tokyo on Tuesday and vowed to work together for a "free and open Indo-Pacific" in an alliance designed to contain China's assertiveness in the region.
Advertisement