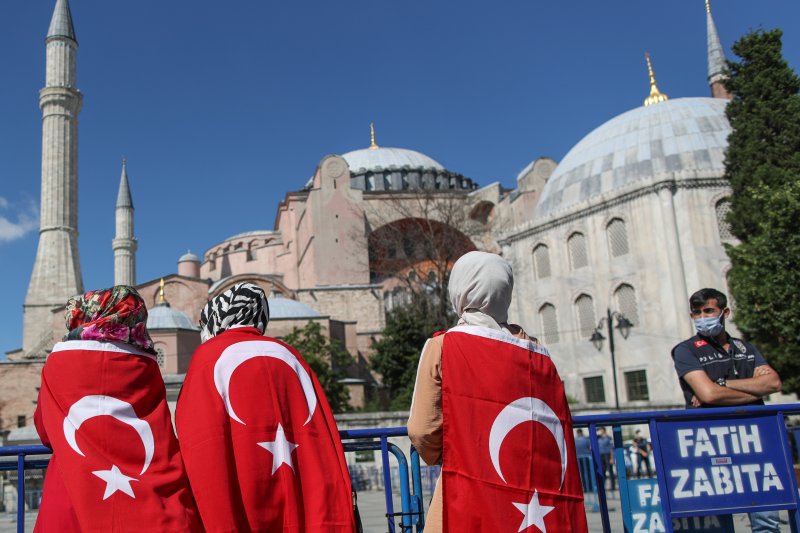 Turkish citizens view the Hagia Sophia Museum in Istanbul, Turkey, on July 10. Friday, it was redesignated a mosque for the first time since 1934. Photo by Erdem Sahin/EPA-EFE

July 24 (UPI) -- The historic Hagia Sophia in Istanbul, Turkey, reopened Friday as a mosque for the first time in 86 years after it was repurposed for decades as a museum.

The controversial conversion back into a mosque was led by Turkish President Recep Tayyip Erdogan, who supported the return of worshippers to the Hagia Sophia. He ordered the switch after a top Turkish court this month annulled a decree that made the UNESCO World Heritage site a museum.

"Now this place has returned to its original form," Erdogan said Friday. "However, it is a place where people from all religions can come and visit as a cultural heritage of all humanity."

The Hagia Sophia was the seat of the Greek Orthodox Church when it was built in the 6th century during the reign of the Byzantine Empire. In 1453, it was converted into an imperial mosque during the Ottoman Empire and remained one until the decree in 1934 during Turkey's secular single-party rule.

The switch was criticized by religious and political leaders. The World Council of Churches, which includes religious leaders from 110 countries, asked Erdogan this month to reverse his decision and keep Hagia Sophia a museum.

U.S. Secretary of State Mike Pompeo also urged that the site remain unchanged, saying it should be shared with followers of all religions.

A number of worshipers waited in line beginning Thursday night to enter the newly redesignated mosque.

World News // 7 hours ago
World leaders pledge $300M to Lebanese 'people' after explosion
Aug. 9 (UPI) -- World government leaders have pledged nearly $300 million in humanitarian assistance, including $17 million from the United States, to be given directly to the people of Lebanon after a blast in Beirut killed more than 150 people and injured 6,000.