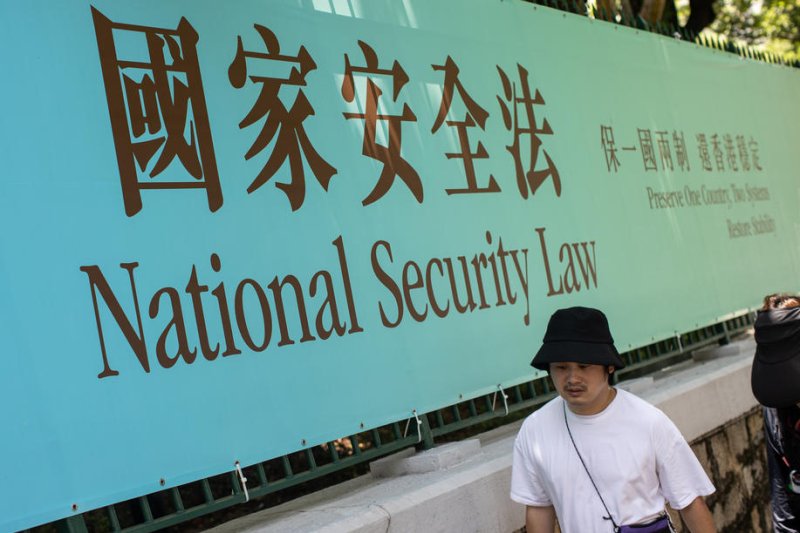 Pedestrians walk past a billboard for the National Security Law in Hong Kong on Wednesday. Britain has suspended its extradition treaty with its former colony, citing the new measure. Photo by Jerome Favre/EPA-EFE

"I've consulted with the home secretary, the justice secretary, and the attorney general, and the government has decided to suspend the extradition treaty immediately and indefinitely," Raab said during a session of Parliament.

The move came after Beijing this month began enforcing the new National Security Law, which critics see as targeting pro-democracy protesters in Hong Kong. The vaguely worded measure criminalizes secession, subversion, terrorism, and collusion with foreign powers, with those convicted facing sentences of up to life in prison.

"We will always protect our vital interests including sensitive infrastructure and we won't accept any investment that compromises our domestic or national security," Raab said in following Canada and Australia in tearing up extradition agreements with Hong Kong.

"This must mark the start of a more strategic approach to China based on an ethical approach to foreign policy and an end to the naivety of the 'golden-era years,'" shadow foreign secretary Lisa Nandy told Parliament.

"We urge the U.K. to stop going further down the wrong path to avoid greater damage to China-U.K. relations," he said.

During his address to Parliament, Raab also raised "grave concerns" about the "gross human rights abuses" against Uighur Muslims in China, partly in reaction to reports of forced sterilization of Uyghur and other Muslims in Xinjiang province.

Britain this month created a path to citizenship for some 3 million residents of its former colony. Under the plan, certain Hong Kong residents will be allowed to work and study in Britain for five years, after which they will be able to apply for a one-year settlement status before becoming eligible for citizenship.