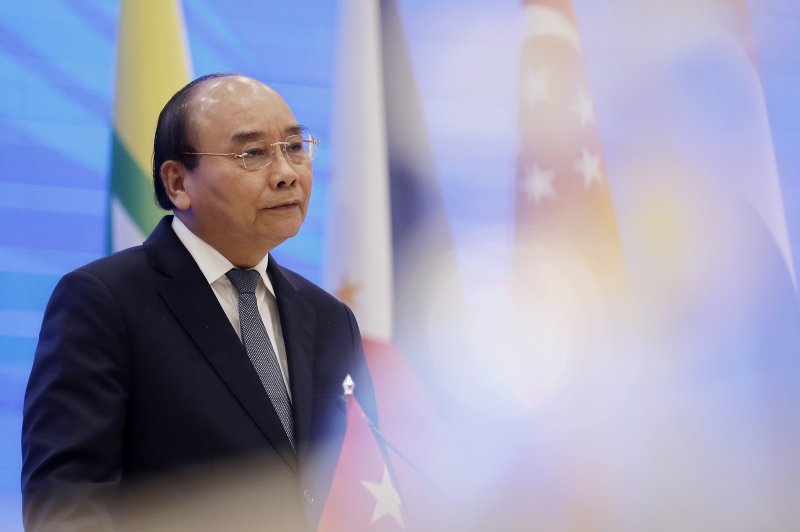 June 26 (UPI) -- Vietnamese Prime Minister Nguyen Xuan Phuc condemned "irresponsible actions" in the South China Sea during his address to regional leaders of the Association of Southeast Asian Nations at a virtual summit on Friday.

"While the entire world was fighting an epidemic, irresponsible actions that violate international laws and pose threats to security and stability were taking place in some areas, including" Vietnam's, Phuc said.

The prime minister was referring to the South China Sea, known as the East Sea in Vietnam, according to reports. In April, a Chinese maritime surveillance boat rammed a Vietnamese fishing vessel near disputed islands, according to Vietnam's foreign ministry.

RELATED U.S. agrees to EU offer to create dialogue on China's threat to the West

While there were no casualties following the incident, all the Vietnamese fishermen were reportedly picked up by the Chinese boat. The collision drew strong condemnation from Vietnam at the time.

The Vietnamese prime minister may have also been referring to a more recent incident on June 10. According to Tuoi Tre newspaper, a Chinese ship rammed into a Vietnamese fishing vessel in the Paracel Islands. The Chinese may have been enforcing a unilateral fishing ban in the disputed area also claimed by Vietnam, according to Radio Free Asia.

The Vietnamese fishermen were also chased before the collision and all 16 crewmembers had to jump overboard, according to reports.

Philippine Defense Secretary Delfin Lorenzana said any Chinese plan to set up an air defense identification zone over the South China Sea would be illegal, following reports of Beijing's plans.

Earlier in the week commander of the U.S. Pacific Air Force, Gen. Charles Brown Jr., said a Chinese ADIZ "goes against the rules-based international order" and "impinges upon some of the international airspace," according to reports.

World News // 7 hours ago
11 killed as Russia launches new missile strikes in Ukraine
Jan. 26 (UPI) -- Russia launched 55 missiles against Ukraine on Thursday, 47 of which were shot down by air defense, according to the Ukrainian Ministry of Defense. A total of 11 people were killed by strikes, emergency services said.

World News // 10 hours ago
Toyota CEO Akio Toyoda to step down, move to board position
Jan. 26 (UPI) -- Toyota CEO and President Akio Toyoda will leave those roles April 1 and become chairman of the board. Toyota Chief Branding Officer Koji Sato will be the new CEO.

World News // 1 day ago
Knife attack on German train kills 2, injures 7
Jan. 25 (UPI) -- A knife attack on a train in the German state of Schleswig-Holstein has left two people dead and seven wounded, according to state Interior Minister Sabine Sutterlin-Waack.

World News // 1 day ago
U.S., Germany agree to send advanced tanks to Ukraine
Jan. 25 (UPI) -- President Joe Biden said the United States will send 31 of its advanced Abrams tanks to Ukraine, along with parts, for its defense, joining Germany, which said it will send its Leopard 2 tanks.
Advertisement

U.S. reservist who spied for China gets eight-year sentence