A picture posted on Twitter shows police and emergency responders near the scene of a stabbing incident in downtown Glasgow on Friday. Photo by Patrick Pieciun/EPA-EFE

June 26 (UPI) -- A police officer was stabbed and a suspect shot during a Friday incident at a hotel in the Scottish city of Glasgow, officials said.

Police Scotland confirmed that an armed officer shot a suspect after another officer was injured during an attack in the City Center.

Assistant Chief Constable Steve Johnson said the incident "is contained at this time and there is no danger to the general public," but provided no details on the condition of the suspect or others had been killed or injured in the incident.

Unconfirmed reports indicated that three people were stabbed to death in the incident and that the suspect was killed by police.

Images posted on social showed large contingent of armed police entering a building with emergency vehicles outside parked outside.

"The reports from Glasgow City Center are truly dreadful," Scotland First Minister Nicola Sturgeon wrote on Twitter. "My thoughts are with everyone involved. I am being updated as the situation becomes clearer."

"Deeply saddened by the terrible incident in Glasgow, my thoughts are with all the victims and their families," British Prime Minister Boris Johnson tweeted. "Thank you to our brave emergency services who are responding."

World News // 41 minutes ago
Police suspect explosive device set off blast at Sweden apartment building
Sept. 28 (UPI) -- Authorities believe an explosion at a Swedish apartment building on Tuesday -- which injured a number of people and started multiple fires -- was probably caused by a bomb-like device.

World News // 2 hours ago
Japan to end all COVID-19 states of emergency nationwide this week
Sept. 28 (UPI) -- Later this week, Japan will emerge from a persistent state of COVID-19 emergency for the first time in six months, government officials in Tokyo said Tuesday.

World News // 4 hours ago
Activist Greta Thunberg on politicians' climate promises: 'Blah, blah, blah'
Sept. 28 (UPI) -- Ahead of a major climate summit in a few weeks, activist Greta Thunberg again ramped up pressure on global leaders at an environmental rally in Italy Tuesday -- saying that they have been all talk and no action. 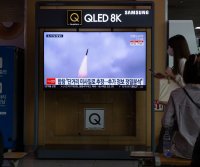