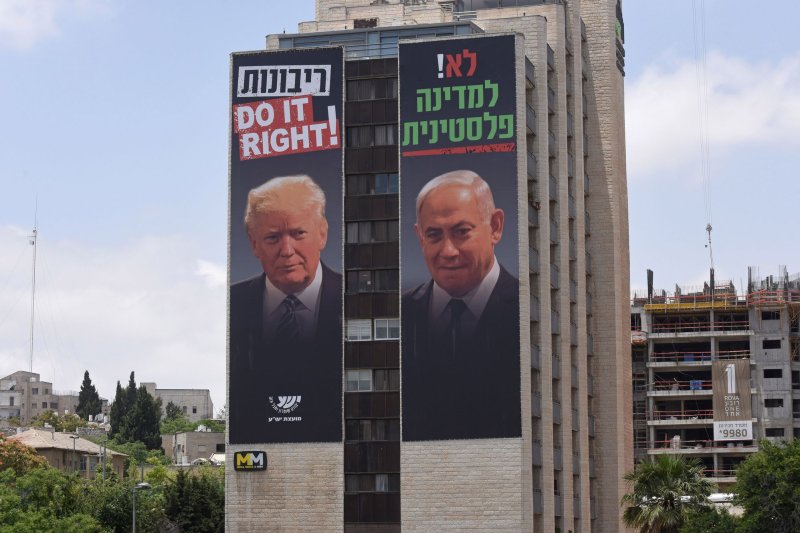 A billboard with photos of U.S. President Donald Trump and Israeli Prime Minister Benjamin Netanyahu states, in Hebrew, "No to a Palestinian state," while overlooking a highway in Jerusalem, Israel last Thursday. Photo by Debbie Hill/UPI | License Photo

June 23 (UPI) -- Soldiers guarding Jewish visitors to the holy site of Joseph's Tomb in the West Bank clashed with protesters Tuesday amid controversial plans by Israel to annex portions of occupied territories there.

Official Palestinian news agency WAFA reported that one demonstrator was injured as Israeli troops at the holy site near the West Bank city of Nablus fired rubber bullets and deployed tear gas.

WAFA reported that Palestinian youths led the protest at Joseph's Tomb, which is located in area of the West Bank under sole Palestinian control.

The clash came one week ahead of Israel's intent to annex parts of the West Bank under a plan by Prime Minister Benjamin Netanyahu, who vowed to impose sovereign control over at least some territories as soon as July 1.

Ashkenazi instead advocates they be done only in coordination with the United States, neighboring states including Jordan and the Palestinian Authority.

The planned annexations have been denounced by Palestinians, Jordanian King Abdullah, the United Nations and European Union.

The Trump administration is expected to decide this week whether to support Israel's plans to annex parts of the West Bank, taking into consideration the possibility the move could spawn violent protests and terrorism.

A group of Israeli military officers published an open letter to Trump on Tuesday, which thanks the U.S. leader for his longstanding support for Israel and urges him to support the annexation plans.

"We trust that you will continue to work to secure the future peace of the people of Israel and of the Middle East as a whole," they wrote.

World News // 5 hours ago
Eurozone posts surprise GDP rise in fourth quarter
Jan. 31 (UPI) -- The eurozone remained in the black in the fourth quarter, eking out a slight, but unexpected, rise in gross domestic product, the European Union announced Tuesday.

World News // 5 hours ago
Death toll rises as Peshawar crews end search at mosque
Jan. 31 (UPI) -- The death toll from the terrorist explosion at a Pakistani mosque on Monday rose to 100 as emergency crews completed their search for bodies, officials said on Tuesday.

World News // 1 day ago
Explosion at Pakistani mosque kills at least 48, injures many others
Jan. 30 (UPI) -- A suicide bomber allegedly detonated an explosive vest during crowded afternoon prayer at the Police Lines Mosque, officials said. About 150 were injured in the attack, some in critical condition.