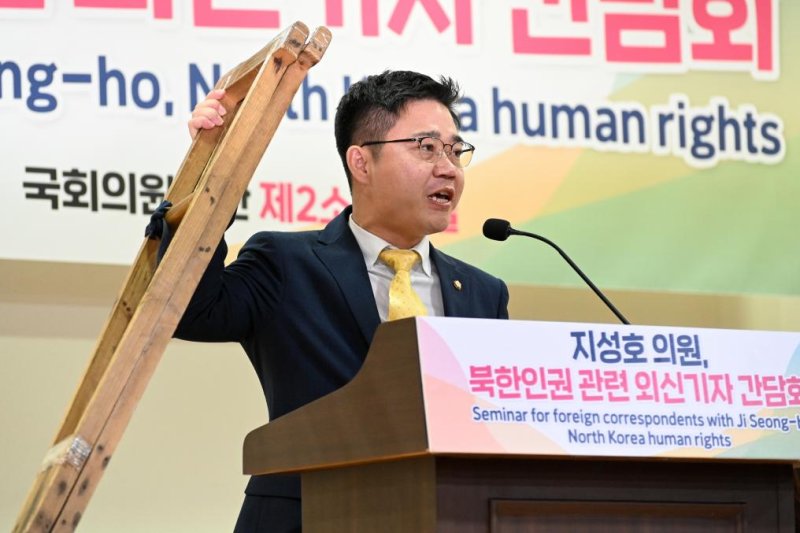 Ji Seong-ho, a high-profile North Korean defector who was elected to South Korean parliament in April, said Thursday that information campaigns such as sending leaflets to the North should continue. Photo by Thomas Maresca/UPI

SEOUL, June 4 (UPI) -- Ji Seong-ho, the high-profile North Korean defector who was elected to South Korea's parliament in April, said Thursday that efforts to send information such as leaflets into his isolated former country should continue despite a warning from Pyongyang over the practice.

"Of course I understand that these kind of activities create many problems," Ji said at a press conference for international media at the National Assembly on Thursday. "I want to emphasize the importance of the North Korean people's right to know. The right to know is a human right."

Ji's remarks came after Kim Yo Jong, the sister of North Korean leader Kim Jong Un, issued a statement through state-run media calling the sending of information leaflets by defectors a "sordid and wicked act of hostility" and threatened that Pyongyang would withdraw from a military agreement with Seoul unless the South took action.

"Clearly speaking, the [S]outh Korean authorities will be forced to pay a dear price if they let this situation go on while making sort of excuses," she said Thursday in a statement carried by the Korean Central News Agency.

Kim Yo Jong warned that North Korea would abandon a military agreement signed in 2018 that sought to remove cross-border tensions and would suspend operations of a joint liaison office in the city of Kaesong if South Korea did not act to stop the leaflets.

She added that the South had "better get themselves ready for possibility of the complete withdrawal of the already desolate Kaesong Industrial Park following the [stopping of tours] of Mount Kumgang," two joint projects that the administration of South Korean President Moon Jae-in has been eager to restart.

In the statement, Kim Yo Jong referred specifically to hundreds of thousands of leaflets criticizing North Korea's nuclear weapons program that were sent by defector groups on balloons across the border on Sunday.

She called the defectors "human scum little short of wild animals who betrayed their own homeland."

The South Korean government has in the past criticized the practice of sending leaflets, saying it causes danger to residents living near the border and on Thursday called for a stop to the campaigns.

Yoh Sang-key, spokesman for the Ministry of Unification, which oversees relations between the two Koreas, said his ministry is planning to institute a ban on the "tension-causing acts."

"Actually, most of the leaflets have been found in our territory, causing environmental pollution and increasing burden on local people to get rid of them," he said at a daily briefing, according to news agency Yonhap. "Any act that could pose a threat to the life and property of those people should be stopped."

Ji, the defector who rose to international fame when he was invited to the 2018 State of the Union address by U.S. President Donald Trump, said efforts such as sending the leaflets are vital for giving North Koreans information about the outside world.

"Before the [South Korean] government talks about stopping the sending of leaflets, I believe that they should come up with an alternative measure that will enable us to send information to North Korea," he said. "If the current government tries to stop this, they will not be exempt from criticism from the international community."

Ji was speaking to reporters on Thursday to announce that he would be proposing a bill in the legislature to allow the roughly 35,000 North Korean defectors living in South Korea to receive compensation for human rights violations suffered in the North.

The defector-turned-politician lost an arm and a leg at the age of 13 after being hit by a train in North Korea and escaped on crutches in 2006. He said that it was important that people in his former country hear stories such as his to allow them to imagine greater possibilities of their own.

An activist group called the Fighters for a Free North Korea said in early May that it sent leaflets to the North announcing the election of Ji and another North Korean defector, Thae Yong-ho, to the South Korean National Assembly on April 15.

Ji, a former human rights activist, said that his goal is to see the North Korean regime changed "from the bottom up" by citizens who are craving freedom.

"I believe the minute the moment that the North Koreans realize the value of freedom, that will be the time when our aspiration toward a peaceful unification will begin," he said.

The Moon Jae-in administration has been criticized by some rights groups for underplaying the issue of human rights under the repressive North Korean regime in the interest of advancing its peace agenda.

Ji said that a diplomatic approach that addresses only the demands of North Korea's leaders and ignores its citizenry is doomed to fail.

"I want to emphasize that a North Korean policy that overlooks its people and focuses only on the regime has no hope," he said. "It will not succeed."

World News // 9 hours ago
Trial starts in Russia for WNBA star Brittney Griner
July 1 (UPI) -- The Moscow cannabis oil possession trial of WNBA player Brittney Griner began Friday, with Griner facing a possibility of up to 10 years in a Russian prison if convicted.

World News // 10 hours ago
Inflation jumps to record 8.6% in eurozone
July 1 (UPI) -- Inflation in the eurozone reached an annual rate of 8.6% in June, an increase from 8.1% in May, according to the latest European economic statistics released Friday.

World News // 11 hours ago
Former U.S. military base in South Korea to become green park in heart of Seoul
SEOUL, July 1 (UPI) -- For almost 120 years, Yongsan Garrison has been off-limits to South Korean civilians -- but now the walled compound in the heart of Seoul is turning into a public park that officials say will transform the city.

World News // 20 hours ago
Xi Jinping returns to Hong Kong for first trip outside of mainland China in two years
June 30 (UPI) -- Chinese President Xi Jinping traveled to Hong Kong on Thursday to mark the 25th anniversary of its return from British rule and to inaugurate the administration of its new chief executive, John Lee.