Alstom and Snam said Thursday they would partner together to develop hydrogen trains in Italy. The move follows protests against fossil fuel production. File Photo by Jim Ruymen/UPI | License Photo

June 4 (UPI) -- French company Alstom announced Thursday that it has agreed with Italian company Snam on a plan to develop hydrogen-powered trains in Italy next year.

Snam, an energy infrastructure company, has signed a five-year agreement with the sustainable mobility company, Alstom, on the railway project, a company statement said.

Both companies plan to develop railway mobility projects, including the hydrogen trains, at the start of 2021, according to the statement.

Under the agreement, Alstom will be charged with manufacturing and maintaining the newly built hydrogen trains, and Snam will develop production, transport and refueling infrastructure.

"We believe in hydrogen," said Managing Director Michele Viale of Alstom Italy and Switzerland in the statement, adding that the company previously launched Coradia iLint.

The iLint, the first fuel cell train in the world, has already been in service for a year and a half on a regional route in Germany. Meanwhile, Snam became one of the first companies worldwide to experiment a 10 percent hydrogen injection into the natural gas transportation network.

"This move is a further contribution to the decarbonization of transport and to the development of hydrogen economy in Italy," Snam CEO Marco Alvera said in the statement. "Hydrogen produced from renewables will become competitive with fossil fuels in a few years and will play a key role in the energy transition, particularly in industry, heating and heavy transport. It will be a pillar of the European Green New Deal and post-COVID investments."

Rivers ensure one-third of carbon from fires is stored in the ocean Study: The world lost 30 million acres of tree cover in 2019 Trees in forests all over the world are getting younger, shorter 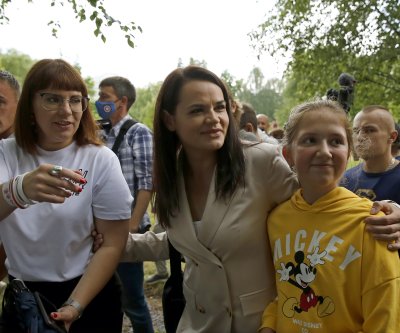 World News // 2 hours ago
Protesters, police clash for a second night after Belarusian election
Aug. 10 (UPI) -- Protesters and police clashed in the streets of Minsk on Monday as demonstrations continued against the election of incumbent authoritarian President Aleksandr Lukashenko to a sixth term.

World News // 13 hours ago
Netanyahu, education minister aim to open Israel schools Sept. 1
Aug. 10 (UPI) -- Israeli Prime Minister Benjamin Netanyahu told his political party Monday schools will be open for all students on Sept. 1, going against a top adviser who said the start date may need to be delayed.