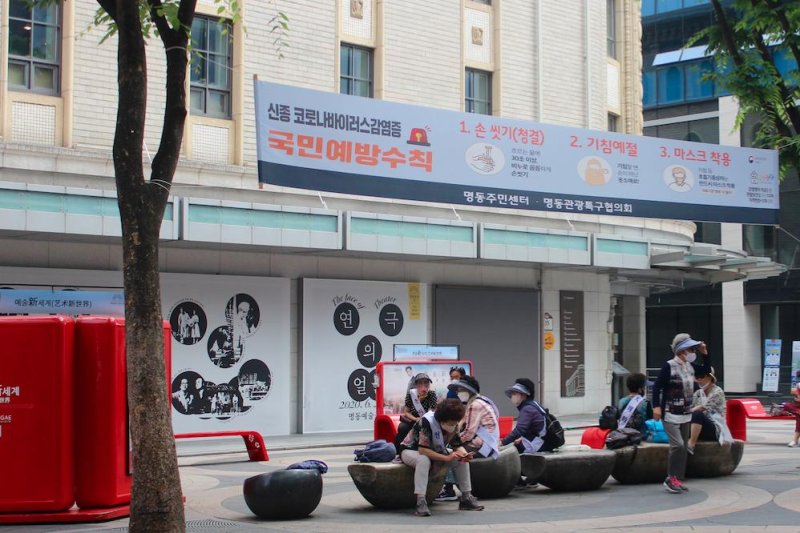 South Koreans wearing masks lounge in a rest area in the Myeongdong shopping district in Seoul under a public health banner. Many of the district's stores were closed on Wednesday morning. Photo by Elizabeth Shim/UPI

Seoul’s Minister of Health and Welfare Park Neung-hoo (L) and Minister of Science Choi Ki-young (R) spoke before reporters at a meeting of a pan-government task force on Wednesday in Seoul. Photo by Elizabeth Shim/UPI

SEOUL, June 3 (UPI) -- Pride and anxiety are mingling in South Korea, following the country's handling of the coronavirus pandemic.

International acclaim for Seoul's response to COVID-19, built on a foundation of widespread testing, information transparency and cooperation with the private sector, continues to be a source of national satisfaction. South Korea's confirmed cases of the deadly virus have also remained relatively low, despite detecting its first case the same day as the United States.

Experts are warning the public in the wake of new outbreaks, however.

The latest cases, involving dozens of people tied to church gatherings and logistics centers in satellite cities outside Seoul, have demonstrated yet again the virus continues to spread when social distancing guidelines are relaxed.

Choi Ki-young, Seoul's minister of science and information communications technology, told reporters during a pan-government task force on coronavirus vaccines on Wednesday pandemic problems are expected to persist in the absence of a medical solution.

"As evidenced by the occurrence of group infections at a logistics hub, the number of confirmed cases continue to rise and fall," Choi said during the meeting at The Westin Chosun Seoul, referring to cyclical outbreaks that began in May with an infection cluster in Seoul nightclubs.

The South Korean official said the answer to the chronic virus is long-term development of a vaccine, proactive policymaking and cooperation between the public and private sectors.

"Using our coronavirus response as the foundation, the most important asset we have secured in each sector is pandemic know-how," the science minister said.

Seoul's Minister of Health and Welfare Park Neung-hoo said after a closed meeting of the task force the government is to approve about $82 million for the development of a vaccine and COVID-19 treatments in the second half of 2020.

Starting in July, Seoul will also invest more than $490 million over the next 10 years to develop a commercial vaccine, Park said.

South Korea's race to develop a COVID-19 vaccine comes at a time when the country is capable of producing 1 million COVID-19 testing kits per week.

The rapid response to contain the virus took even South Koreans by surprise, Hwang Myung-Jin, a social welfare expert and sociologist at Korea University, said during a seminar on COVID-19 at the National Assembly hosted by a local lawmaker and an NGO specializing in improving welfare services.

South Koreans had pursued the ideal of becoming an advanced or developed country for decades. But it took the coronavirus pandemic, and a highly popular disaster relief fund, for the public to realize that milestone achievements in welfare have been made, Hwang said.

"We didn't know we were already a developed nation, and so we kept chasing this goal," Hwang said. "South Korea made great strides" during the pandemic, he added.

The analyst said there have also been less encouraging outcomes in the virus' aftermath.

The country has witnessed a spike in discrimination against people from outbreak epicenters like Daegu, where a "super-spreader" at a secretive religious organization infected thousands of people in February. More recent infections at churches have triggered anti-religious sentiment on social media.

Hwang, who described discrimination and hate speech directed at religious people as a "social disease" that accompanies an outbreak of COVID-19, suggested not enough is being done to address the prejudice directed at people who have or had the disease.

During a research interview with a former COVID-19 patient, Hwang said he stopped to take off his face mask, a move that could lift the stigma for his subject.

"It was the proper thing to do," he said.

No South Korean, with the exception of Yoon Hak of K-pop group Supernova, has been publicly identified or come forward as a coronavirus patient since the first case was reported in January.

World News // 14 hours ago
Hyundai acknowledges coolant leak in Ioniq 5
SEOUL, June 18 (UPI) -- Hyundai is under fire from customer complaints that the Ioniq 5 leaks coolant within the first months of usage.

World News // 19 hours ago
European Union reopens to American travelers
June 18 (UPI) -- The European Council on Friday announced that countries in the European Union could gradually lift travel restrictions on several nations, including the United States.