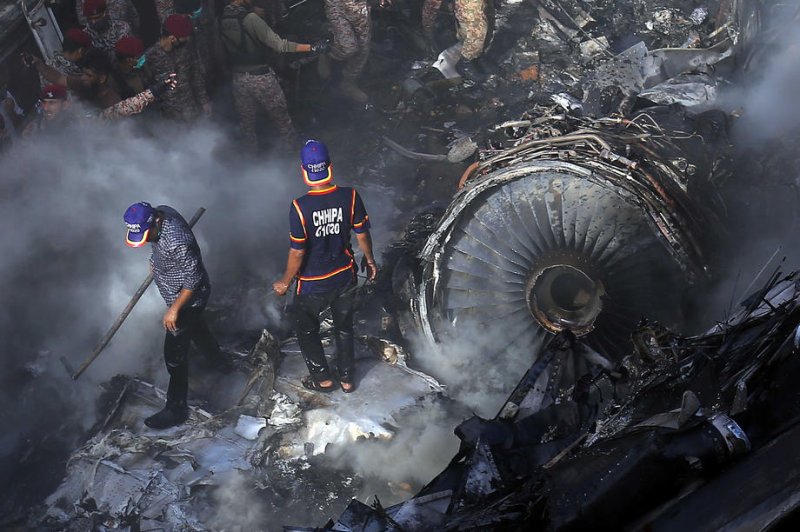 Rescue workers search for survivors in the debris from a passenger plane that crashed Friday in residential colony in Karachi, Pakistan. Photo by Shahzaib Akber/EPA-EFE

Ambulances arrive near the scene of a passenger plane crash of a Pakistan International Airlines in Karachi, Pakistan, on Friday. Photo by Rehan Khan/EPA-EFE

May 22 (UPI) -- At least 76 died Friday in a fiery plane crash in Pakistan that may have been caused by a double engine failure, local officials said.

Pakistan International Airlines Flight PK-8303 was en route from Lahore to Karachi when it crashed less than a minute before landing at Karachi's Jinnah International Airport in the morning, authorities said.

Pakistan's Aviation Ministry said 99 people were aboard the jetliner, an Airbus A320. Health officials in Sindh state said at least 79 people have been confirmed dead.

Sindh Gov. Imran Ismail said the plane crashed in a heavily populated area of Karachi adjacent to the airport. The plane didn't strike any buildings and appears not to have killed anyone on the ground.

The pilot of the airliner sent a distress call to controllers and said the plane had lost power from both engines on its second attempt to land, according to LiveATC.net. The call also indicated the plane may have been off-course.

Pakistani Prime Minister Imran Khan said he was "shocked and saddened" by the crash.

"Am in touch with PIA CEO Arshad Malik, who has left for Karachi & with the rescue & relief teams on ground as this is the priority right now," he tweeted. "Immediate inquiry will be instituted."

Crews are looking for the plane's flight recorders, or "black boxes," which will help investigators determine the cause of the crash.

A State Department official told CNN one U.S. citizen was on board the flight.

"We are monitoring the situation closely and are in touch with local authorities," the unnamed official said. "Our staff in Pakistan and here in the United States are working tirelessly to provide all possible consular assistance."

World News // 23 hours ago
Gun salutes honor Prince Philip as low-key funeral planned amid COVID-19
April 10 (UPI) -- Gun salutes across the United Kingdom and British Commonwealth honored Prince Philip on Saturday as preparations were made for a somber funeral amid COVID-19 restrictions next Saturday.