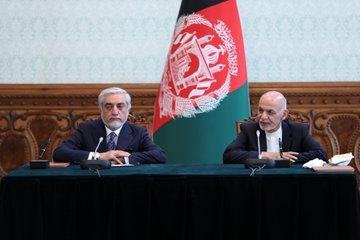 The political agreement between the pair will see Ghani continue as president while Abdullah will lead the High Council for National Reconciliation in its peace negotiations with the Taliban militant group, presidential spokesman Sediq Sediqqi said in a statement.

"We have shown that without the mediation of international friends, we can reach fundamental solutions in a reasonable way," Ghani said during the ceremony on Sunday.

The agreement is expected to end months of political turmoil that followed Abdullah refusing to accept last September's presidential election, claiming he had won and alleging fraud. The country's election body had said in February that Ghani had narrowly won a second term in office.

Following the signing, Abdullah described the deal as neither a privilege nor a handout but an agreement "rooted" in the votes of the last election.

The deal, he said, will ensure a path toward peace, improved governance, protected rights and respect for laws and values during a time when the country is fighting a pandemic and suffering from an increase in violence committed by the Taliban.

"We now need to come together as a nation, strive to seek solutions that are practical," he tweeted. "We cannot afford to squander opportunities and international goodwill, especially for a just and comprehensive peace through talks."

Sediqqi said members of Abdullah's team will be included in the Afghan cabinet, though details will be announced later.

The agreement came amid mounting pressure in Kabul as the government attempts to negotiate a peace agreement with the Taliban that would end the nearly two-decade war as it fights the coronavirus pandemic.

The ending of talks saw an increase in violence in the country and last week militants committed a series of attacks killing dozens, including mothers and newborn babies during a siege on the maternity ward of a Kabul hospital.

On Sunday, U.S. Secretary of State Mike Pompeo said he was "glad to hear" the two had come to a decision.

"We welcome their commitment to act now for peace in Afghanistan," he tweeted.

The State Department said in a statement that the United States' top diplomat congratulated both Ghani and Abdullah over the phone Sunday, but noted with regret "the time lost during the political impasse."

In late March, Pompeo announced a $1 billion cut in aid to the country with a further $1 billion earmarked for next year on the chopping block as the rivals' failure to come to a decision on an inclusive government had "harmed" the U.S.-Afghan relationship.

NATO also said it welcomes the agreement between Ghani and Abdullah, stating "it is more important than ever that all Afghan leaders unite and work towards enduring peace in Afghanistan."

"We call on the Taliban to live up to their commitments, reduce violence now, take part in intra-Afghan negotiations and make real compromises for lasting peace and the benefit of all Afghans," NATO said in a statement.

Hamdullah Mohib, the national security advisor for Afghanistan, heralded the signing as the end of political tensions in the country.

"Responding to this concern, Afghans demonstrated their ability to maintain stability, unity and strengthen the republic, and stated that they were cooperating in achieving peace and ending the war," he tweeted. 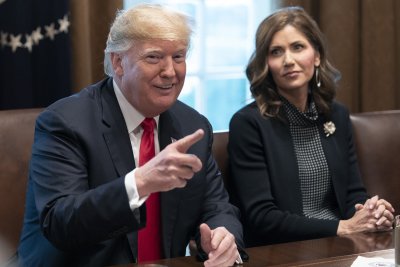