As part of the agreement, Gantz will become Israeli prime minister in October 2021. File Photo by Debbie Hill/UPI | License Photo

April 20 (UPI) -- Prime Minister Benjamin Netanyahu and rival Benny Gantz Monday signed an agreement to establish a unity government in Israel after three national elections and contentious negotiations between their parties right up to its signing.

Gantz, who was serving as Knesset speaker, had threatened to allow anti-Netanyahu legislation to reach the body that would have forced the prime minister out of forming a government because of indictments against him.

Netanyahu will remain as prime minister for 18 months under the deal and Gantz will replace him after that. The government will have 36 ministers and 16 deputies consisting of members of the Likud and Blue and White parties along three minor parties.

"I promised the State of Israel a national emergency government that will work to save lives and livelihoods of Israeli citizens," Netanyahu said, a move that avoids a fourth national election in 13 months.

Gantz said the unity government will allow them to "protect our democracy and fight against the coronavirus."

The unity government did cost Gantz part of his Blue and White alliance, which had helped him successfully battled Netanyahu and his Likud Party to a standstill over the three elections. Blue and White's co-leaders Yair Lapid and Moshe Ya'alon filed to split from the rest of the alliance when Gantz put himself up as Knesset speaker at the behest of Likud last month.

The breakthrough appears to be Likud winning a concession that ensures a conservative majority on a panel that makes judicial appointments, something Blue and White balked at even Monday morning before the agreement's signing. The move gives Netanyahu power to veto nominations, even though he remains under indictment by Israeli courts.

Lapid, head of the Yesh Atid-Telem Party, blasted the compromise.

"So the compromise on the Judicial Appointments Committee is that Bibi [Netanyahu] chose all its representatives," Lapid said. "Gantz and [Blue and White MK Gabi] Ashkenazi agreed to allow the criminal defendant to appoint the judges that will adjudicate his affairs."

The Knesset could have voted on legislation that would have barred Netanyahu from forming a government as early as Tuesday before the signing.

Gantz's move could allow the Knesset to vote on the measure as early as Tuesday.

Netanyahu and Gantz met again Monday to discuss forming a unity government. The two leaders in previous days had signaled possible progress toward a deal.

The prime minister's Likud Party has so far demanded a change in rules that could give it greater control of judicial appointments -- a move some critics believe is aimed at guarding Netanyahu against his corruption charges. The Blue and White Party has rejected those demands.

Lawmaker Yair Lapid, who split with the Blue and White Party when Gantz accepted the Knesset speaker position, criticized his former ally Monday for his attempts to work with Netanyahu.

"Either you fight corruption or you're a part of it," Lapid tweeted. "In Blue and White, they've chosen a side." 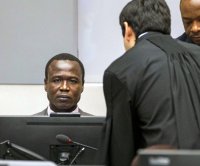