Smog haze hangs over Kiev, Ukraine, on Friday. This week air quality in Ukraine ranked as worst in the world due to multiple fires burning in the country, including in the Chernobyl exclusion zone. Photo by Sergey Dolzhenko/EPA-EFE

April 18 (UPI) -- Multiple wildfires spreading across Ukraine have burned 38 homes and 15.4 square miles of forest and forced residents to keep their windows shut due to air pollution.

On Friday and Saturday the concentration of dust and burning residues have at least doubled and may have increased fourfold, with concentrations of nitrogen dioxide, sulfur dioxide and formaldehyde increasing by two or three times over typical amounts, the Kyiv Post reported.

Air quality levels in Ukraine this week have registered as the worst in the world.

As of Saturday morning, Kiev's Air Quality Index ranged from 360 and 499 in different parts of the city, rated "hazardous," though markers had returned to a "moderate" rating by Saturday evening.

Meteorologists say air quality in Kiev, the country's capital and largest city, may improve early next week due to a predicted change in wind direction.

Kiev officials initially said smoke in the city was caused by fires in the Chernobyl exclusion zone, but Anatoly Prokopenko, deputy director of the Ukrainian Hydrometeorological Center, said fires in the Zhytomyr Oblast -- a large province in the north of Ukraine -- had caused Kiev to be blanketed in smoke since Thursday night.

By Saturday evening, six of 15 fires in the Zhytomyr Oblast forests had been extinguished and five more had been contained, said Volodymyr Demchuk, director of the emergency response at the State Emergency Service.

Firefighters were also trying to extinguish four fires in the Chernobyl exclusion zone. The Chernobyl fires broke out April 4 and were considered contained by Tuesday, but flared up again Thursday due to high winds in the area.

A report released Wednesday by the French Radioprotection and Nuclear Safety Institute found elevated levels of radiation in the area, but Demchuk was quoted in the Kyiv Post on Saturday saying radiation was at a normal level.

World News // 29 minutes ago
Inflation rises in Britain by 9%; steepest surge in 40 years
May 18 (UPI) -- Like the United States, Britain is dealing with its highest Inflation in about 40 years -- due largely to rising energy prices that are being disrupted by Russia's war in Ukraine. 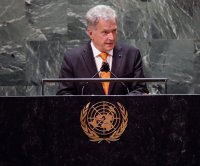 World News // 20 hours ago
Kolmar Korea acquires global ownership of cosmetics brand
SEOUL, May 17 (UPI) -- Kolmar Korea, a cosmetics contract manufacturer based in Seoul, announced Tuesday it has acquired the global trademark rights to the Kolmar brand from the Kolmar headquarters office in the United States.
Advertisement