The Navy said the Iranian ships did not respond to warnings for about an hour before eventually issuing a response to radio communications and maneuvering away from the U.S. ships. Photo by U.S. Navy | License Photo

"The IRGCN vessels repeatedly crossed the bows and sterns of the U.S. vessels at extremely close range and high speeds, including multiple crossings of the Puller with a 50-yard closest point of approach and within 10 yards of Maui's bow," the U.S. Navy said in a statement.

In response to the actions, the U.S. crews issued multiple warnings including five short blasts of the ships' horns and long-range acoustic noise maker devices but the Iranian ships did not respond.

About an hour later the Iranian ships responded to bridge-to-bridge radio inquiries made by the U.S. ships and maneuvered away from the U.S. vessels. 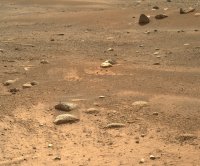