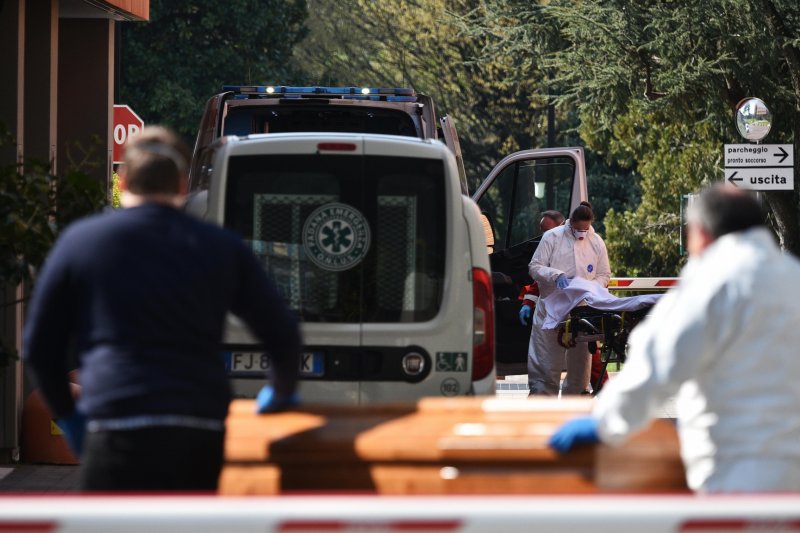 An ambulance arrives at Humanitas Gavazzeni hospital first aid service as workers of a funeral agency take away a body during the coronavirus crisis in Bergamo, Italy, on Saturday. Photo by Filippo Venezia/EPA-EFE

Barcelona's Marina Street is nearly empty Saturday as Spain faces the seventh day of national lockdown in an effort to slow down the spread of the coronavirus. Photo by Andreu Dalmau/EPA-EFE

A strict nationwide lockdown, including restrictions on travel and closure of most stores, had been in place for 11 days in Italy, but the number of known coronavirus cases continued to rise about 15 percent every day, overwhelming hospitals.

The number of cases increased by almost 5,000 in one day and more than 300 people died from the virus in the same time frame. That brings the total number of cases in Spain to 24,926, with 1,612 people in intensive care and 1,326 deaths, the Spanish government said.

In Spain, 2,125 people have recovered, according to the Worldometer.

The country's hospitals and intensive care units are struggling to cope with the demand.

Despite some Madrid hotels being temporarily converted to hospitals, Madrid is still the hardest hit part of the country with 8,921 cases, 767 people in intensive care and 804 deaths.

Spain is second only to Italy in all of Europe in the number of coronavirus cases.

On Saturday, authorities in Australia, which has 791 cases and seven deaths, ordered people off Sydney's famous Bondi Beach after thousands defied a ban on large gatherings.

The beach is still open, but only 500 people are allowed on it, Australian Police Minister David Elliott said after making the decision with "a significant level of disappointment" to remove people from the beach.

Amid coronavirus travel restrictions and growing number of cases and deaths worldwide, the U.S. Air Force has flown dozens of Americans back to the United States who were stranded in Honduras.

The evacuation of 89 Americans from Honduras on Friday night on a pair of charter flights came after the State Department issued a rare Level 4 travel advisory. The advisory warned U.S. citizens not to travel internationally, saying they may have to remain outside the United States for an "indefinite time frame."

One couple, Beth Rosenzweig and Ray Bahr, in Honduras' Bay Islands since March 9 for a scuba trip, said they were stranded after the evacuations, along with other Americans.

"Our government has literally stepped back from their responsibilities," Bahr told The Washington Post, adding that he believes more than a dozen Americans are still stuck at his hotel.

Honduras has 24 cases of the coronavirus and zero deaths, according to the John Hopkins global tracker. The United States has 19,624 cases and 260 deaths.

Columbia has over 150 cases and has not reported any deaths.

On Saturday, Singapore, which has 385 cases, reported its first two deaths from the virus.

The United Arab Emirates, which has 140 cases, also reported its first two deaths.

World News // 57 minutes ago
Activist Greta Thunberg on politicians' climate promises: 'Blah, blah, blah'
Sept. 28 (UPI) -- Ahead of a major climate summit in a few weeks, activist Greta Thunberg again ramped up pressure on global leaders at an environmental rally in Italy Tuesday -- saying that they have been all talk and no action.

World News // 23 hours ago
Israel requires COVID-19 vaccine for recovered patients to keep Green Pass
Sept. 27 (UPI) -- The Israeli health ministry announced on Monday that those who have recovered from COVID-19 must get a single shot of a vaccine to receive a Green Pass, a document that allows them to attend events and enter businesses.