The Iraqi Security Forces found a pick-up truck rigged with a rocket launcher in its bed a few miles away from Camp Taji. Photo courtesy of Iraqi Security Media Cell/Twitter

March 11 (UPI) -- Two Americans and a Briton were killed in a rocket attack on a military base in Iraq on Wednesday night, the U.S. military said.

"Camp Taji is an Iraqi base that hosts [Coalition for Operation Inherent Resolve] personnel for anti-ISIS training and advising missions," Caggins said, using an abbreviation for the Islamic State terror group.

The Iraqi Security Forces found a rocket-rigged truck a few miles away from the camp. The attack is under investigation.

The names of the personnel were being withheld pending notification of next of kin.

"The people that did this are not friends of Iraq," Britain's Defense Secretary Ben Wallace said in a statement. "My thoughts are with the families of those whose loved ones have been killed or injured. We shall not forget their sacrifice and will ensure those who committed these acts face justice."

British Prime Minister Boris Johnson condemned the attack as "deplorable" in a statement.

"The Foreign Secretary has spoken to the U.S. Secretary of State and we will continue to liaise with our international partners to fully understand the details of this abhorrent attack," he said.

The Iraqi Security Media Cell described the attack as "a very serious security challenge and hostile act" while calling on the public to provide any information about the perpetrators.

World News // 19 hours ago
'Rude' South Korea penguin invited to attend parliament
Sept. 25 (UPI) -- A South Korean penguin character with a reputation for making curt remarks and sneering at its boss has been requested to take part in a parliamentary audit.

World News // 22 hours ago
Kim Jong Un apology for South Korean death not enough, defector says
Sept. 25 (UPI) -- A high-profile North Korean defector and lawmaker said a tougher South Korean response is needed in the wake of the slaying of a South Korean official in North Korea, following his disappearance at sea on Monday.

World News // 22 hours ago
EU appeals $15B Apple-Ireland antitrust setback to highest court
Sept. 25 (UPI) -- The European Union said Friday it will appeal a court decision that dismissed a claim against Apple that said Ireland unlawfully granted billions in aid to the U.S. tech company.

World News // 23 hours ago
At least 2 stabbed in Paris near site of 2015 Charlie Hebdo attack
Sept. 25 (UPI) -- French police arrested a man Friday after they say he stabbed at least two people outside the former offices of satirical newspaper Charlie Hebdo, which was the scene of a deadly terrorist attack five years ago. 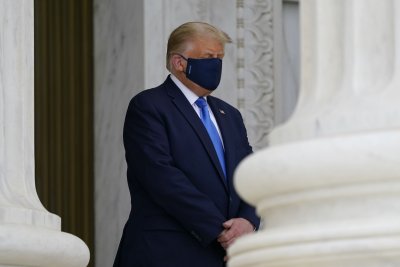