March 1 (UPI) -- The number of coronavirus deaths worldwide passed 3,000 and cases neared 90,000 Sunday with fewer ones being reported in China -- the epicenter of the disease -- but numbers climbing elsewhere, including a 50 percent spike in one day in Italy.

China reported an additional 35 fatalities and 573 cases Sunday morning. Since the first death was reported in China on Jan. 11, triple-digit fatality totals and cases in the thousands have frequently been reported.

Mainland China has recorded 2,870 of the 3,006 deaths, according to a compilation Sunday by the South China Morning Post. on Sunday.

The number of cases has reached 88,177, including 79,824 in mainland China. Hong Kong has two deaths and Taiwan one elsewhere in China.

On Saturday, the World Health Organization llisted the cases at 85,403.

With the disease spreading globally, the WHO said it has issues the "highest level of alert."

"This is a reality check for every government on the planet: Wake up. Get ready," Dr. Mike Ryan, executive director of WHO's health emergencies program, said Friday. "This virus may be on its way and you need to be ready. You have a duty to your citizens, you have a duty to the world to be ready."

RELATED United Airlines suspends some Asia flights due to coronavirus

The bulk of the 133 deaths outside China, including an additional three dozen Saturday, are clustered in Iran with 54, Italy with 34 and South Korea with 20.

Recording their first deaths on Saturday or Sunday are the United States, Australia, Thailand and Ecuador. A second fatality in the United States -- both were in Washington State -- was announced one day later Sunday.

In addition, six deaths are associated with the Diamond Princess cruise ship that traveled to Wuha, China on a scheduled 14-day cruise. Around 700 of the 2,6666 guests and 1,045 crew have been stricken, including 44 Americans.

Princess cruise line said of the passengers left the ship last week, and Health minister Katsunobu Kato said Sunday that all crew members have now left the Diamond Princess after the quarantine since the ship docked in Yokahama, Japan, on Feb. 3.

In Italy, the number of cases jumped Sunday to 1,694 -- primarily in the northern portion of the nation -- from 1,128 on Saturday and 888 on Friday. The death toll rose by eight on Saturday and five on Sunday.

now has 1,694 confirmed coronavirus cases, up from 1,128 confirmed cases on Saturday.

Prime Minister Giuseppe Conte has banned events and meetings in public places in Milan until next Sunday.

American Airlines and Delta Airlines are suspending flights to Milan because of elevated guidance from the U.S. state Department.

On Sunday, Delta said the last flight out of New York's JFK Airport will be Monday and the last return flight will be Tuesday. The airline plans to resume flights to Milan on May 1.

American suspended flights from Miami International Airport and New York's JFK Airport to Milan, the airline announced Saturday night. "Due to a reduction in demand," the airline said, flights are suspended in Milan with service scheduled to resume April 25.

Flights to Rome are not affected.

Amid the outbreak, Pope Francis was coughing at the traditional blessing Sunday in Vatican City. From the window on St. Peter's Square, he said he is canceling his participation at a week-long spiritual retreat in the Roman countryside because of a cold. It wasn't confirmed whether the pope has been tested for coronavirus.

Iran, like in Japan and Korea, has temporarily shut down schools and canceled public gatherings.

In South Korea, the Centers for Disease Control and Prevention announced 586 new cases Sunday for a total of 3,736.

On Sunday, four deaths were reported, all of whom lived in the southeastern city of Daegu and were in their 80s.

That includes one new fatality. Schools are closed for two more weeks.

Of the cases, more than 2,113 are linked to the Shincheonji religious group.

"We are trying our best to check the entire member list of Shincheonji who have traveled to China in January, considering a large outbreak began from South Korea since February," said Kwon Joon-wook, a spokesman for the CDC. "In that process, we have found cases in January including Wuhan but we need to conduct further investigation as this information can be a good reference to understand how such a wide outbreak occurred in South Korea among Shincheonji members."

In Japan, a man in his 70s has died in Hokkaido, northern Japan, bringing the death toll to 12, not counting those on the cruise ship. In all, there are 256 cases.

On Sunday, the Tokyo Marathon had 300 elite runners and about 600 volunteers. Normally, there are 35,000 participants and 10,000 volunteers.

The streets in Tokyo were empty with traffic cones in place to direct runners along the route.

Tokyo Disneyland and Universal Studios began a two-week closure on Saturday. Two Disneyland resorts in Shanghai, China, and Hong Kong have been closed since Jan. 26.

Prime Minister Shinzo Abe asked schools nationwide to close for most of March.

In Australia, the first death was a 78-year-old man repatriated from the cruise ship Diamond Princess.

His wife was also infected and remained in a stable condition, Western Australia state's Chief Health Officer Andrew Robertson told reporters at a press briefing. The number of cases nationwide are 24.

In France, the Louvre museum in Paris announced it "cannot open" Sunday.

On Saturday the French government banned all indoor gatherings of more than 5,000 people.

In addition, a French official has advised against cheek kissing.

Most cases have been linked to travel in mainland China.

China's National Health Commission said 41,625 patients have recovered and been discharged from the hospital and 51,856 are now under medical observation.

Worldwide, 41,997 are listed as being recovered.

Currently no vaccine exists but WHO Director-General Adhanom Ghebreyesus said Friday. During a briefing, he said more than 20 vaccines are in development globally, and several therapeutics are in clinical trials.

"We expect the first results in a few weeks," he said. 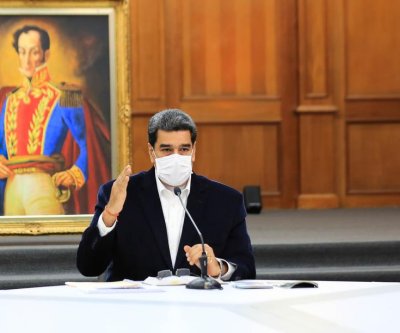 World News // 19 hours ago
Chinese boats sail near Japan-claimed islands for 80th consecutive day
July 2 (UPI) -- Chinese Coast Guard boats have been navigating waters near disputed islands in the East China Sea as tensions rise between Beijing and Tokyo over the Senkaku or Diaoyutai Islands. 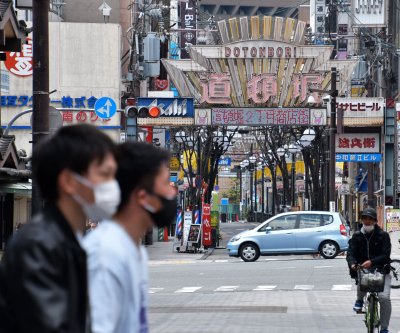