The agreement includes a timeline for the U.S. military withdrawal, which includes a deadline of 135 days for about 4,400 troops to depart. That will leave the United States with some 8,600 troops in Afghanistan.

The goal is for there to be a full withdrawal of U.S. and NATO troops after 14 months, but that's conditional upon the Taliban meeting certain security requirements.

The United States "will closely watch the Taliban's compliance with their commitments, and calibrate the pace of our withdrawal to their actions," said U.S. Secretary of State Mike Pompeo, who attended the signing in Doha, Qatar.

"This is how we will ensure that Afghanistan never again serves for international terrorists," he added.

The signing ceremony came after a weeklong reduction in violence. The United States made the commitment to that partial cease-fire a condition of the signing of the peace deal.

Representatives from nearly 60 countries were on hand for the ceremony.

U.S. forces have been in Afghanistan since late 2001 after the terrorist attacks in New York City and Washington, D.C., and President Donald Trump for months has indicated a desire to withdraw American troops.

The peace deal is seen by the United States as a precursor to the more challenging prospect of direct talks between the Taliban and the U.S.-backed Afghan government, which was not involved in the truce negotiations.

"All the people of Afghanistan are looking forward to a permanent peace," Ghani said.

"The tragedy of 9/11 brought us together. Mutual sacrifice created human bonds between us. Mutual interest, your security and our freedom, sustains our relationship in mutual respect, which has made us partners."

In addition to troop withdrawal, the peace deal stipulates that the Afghan government must work to have Taliban members removed from the U.N. Security Council's sanctions list. The United States must also refrain from using force against the territorial integrity of Afghanistan and interfering in domestic affairs.

Trump praised Saturday's signing during a White House briefing focused on the U.S. response to the coronavirus. He told reporters he'd be meeting with Taliban leaders "in the not-too-distant future."

"We'll be very much hoping that they will be doing what they say they're going to be doing -- they will be killing terrorists," he said. "It's time after all these years to bring our people back home."

World News // 9 hours ago
COVID-19 cases subside to 8% weekly rise but India, Brazil, Japan surge
Jan. 23 (UPI) -- Two months after the COVID-19 Omicron variant was first reported in South Africa, cases have subsided to an 8% weekly rise, including decreases in some world hotspots but spikes in India, Brazil and Japan.

World News // 13 hours ago
French adventurer, 75, dies while rowing across Atlantic Ocean
Jan. 23 (UPI) -- Jean-Jacques Savin had activated two beacons on Friday to alert his team that he was experiencing "great difficulty" before losing contact with them. 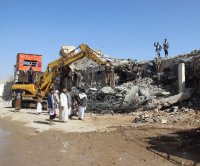