Afghan Army soldiers man a check point in Helmand, Afghanistan, Saturday.  The Taliban has announced a decrease in hostilities in an agreement with the United States as a preliminary step to signing a peace deal with Washington on February 29. Photo by Watan Yar/EPA-EFE

Feb. 22 (UPI) -- U.S. forces and Taliban fighters began a near cease-fire Saturday as part of an agreement to reduce violence for a week to potentially secure a peace deal, a top U.S. military commander said.

Gen. Austin "Scott" Miller made the announcement to reporters in Kabul.

"Our operations are defensive at this point, we stopped our offensive operations as part of our obligations, but we remain committed to defend our forces," he said.

Miller added that the reduction in violence was a "trial period" in which U.S. and Afghanistan government forces could still defend forces if they come under attack.

In Afghanistan, President Ashraf Ghani announced the reduction in violence in a televised address at midnight Friday.

The army will "remain on active defense status during the week," he said.

The reduction in violence began just after midnight Friday and is scheduled to last a week. The two sides hope to sign a peace deal at the end of the month if the cease-fire holds, bringing a resolution to the war that began in October 2001 after the Taliban's refusal to hand over al-Qaida leader Osama bin Laden, who authorized the September 11, 2001, terrorist attacks on the United States. A U.S. military operation killed bin Laden in 2011.

In the first hours after the reduction in violence agreement went into effect early Saturday, local security forces reported a number of clashes between government and Taliban forces.

The attacks that have occurred since the agreement went into effect "are not serious, [except] for one attack in Balkh," Khalid said.

"We are working to find out its cause," he added. "Maybe the message was not sent to them [the Taliban] on time or whatever the cause may be, it will become clear."

Miller did not comment on the incidents overnight, but said the goal of the cease-fire was "about observable trends showing a reduction in violence."

The peace deal, which U.S. and Taliban negotiators have committed to sign if the reduced violence holds, would lead to the withdrawal of thousands of U.S. troops. In exchange, the Taliban would pledge to begin intra-Afghan talks with various political parties in the country and not harbor terrorists to attack the West. 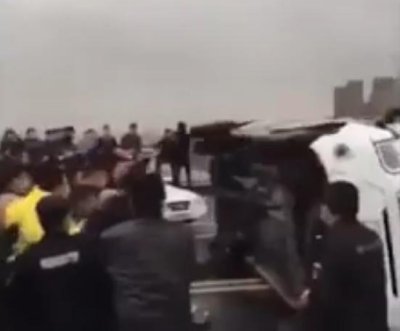