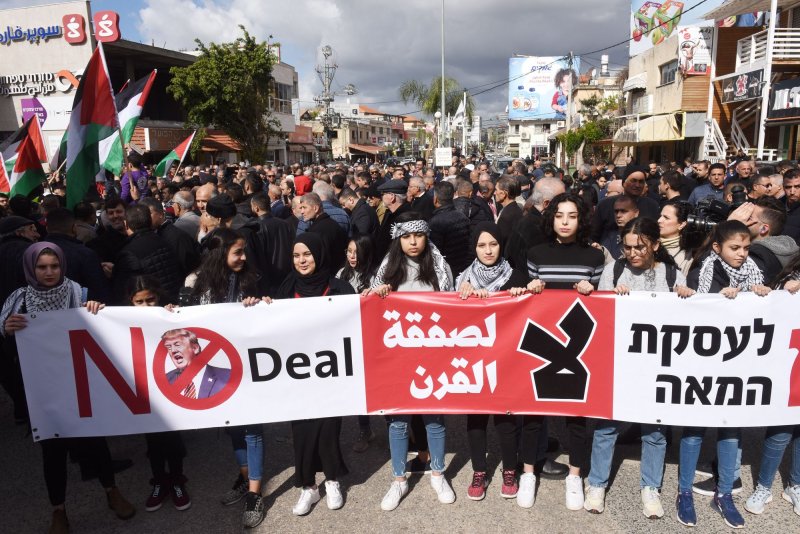 President Donald Trump administration's plan sets aside sections of land for a Palestinian state, but current illegal settlements in the occupied Palestinian territories would be annexed to the state of Israel.

The plan, which calls for a demilitarized Palestinian state, was developed through U.S.-Israeli negotiation without any input from the Palestinians, the Middle East Eye reported.

Abbas announced he would cut ties at an emergency meeting of Arab League foreign ministers in Cairo on Saturday after he and the leaders of Iran and Turkey rejected the plan as one-sided earlier this week.

"We've informed the Israelis and Americans of this decision through two letters," he said at the meeting. "We informed them that Israel has abrogated the agreements signed with the Palestinians and violated the international legitimacy on which these agreements are based.

"Therefore, we notified them that there will be no relations with Israel and the US. That includes security relations in light of their disregard of the signed agreements and international legitimacy," he continued. "The Israelis need to assume responsibility as an occupying power. We have the right to pursue our national struggle with peaceful means to end the occupation. We're not going to carry rifles."

Abbas said the first letter was delivered to Israeli Prime Minister Benjamin Netanyahu and the second was handed to the director of the U.S. Central Intelligence Agency.

Abbas also reiterated his rejection of a demand to recognize Israel as a Jewish state.

"I know that it's not a Jewish state," he said. "I also know that there are 1.9 million Arabs and another 1.5 million Russians who are Christians and Muslims. Only a small number of the Ethiopians are Jews."

Netanyahu tweeted a response to these remarks.

"It seems that Abbas has not yet heard of the Israeli tribes - - Ethiopian immigrants and the Commonwealth," the tweet said. "Our brothers and sisters, they are the flesh of our flesh, Jews from birth who were in exile and who dreamed generations of returning to Zion and who have fulfilled their dreams."

Meanwhile, around 3,000 people protested the peace deal and denounced the proposed land swaps in northern Israel. Demonstrators waved Palestinian flags and shouted slogans condemning Trump and Netanyahu as the march made up of local and national-level Arab elected officials made its way through the city of Baqa al-Gharbiya.

"The idea of land swaps, which was until recently treated as marginal and delusional, has now been vindicated by the Israeli and American right," Arab Joint List parliamentarian Yousef Jabareen tweeted during the protest. "All forces for peace and democracy, in this country and in the world, should join us in the fight against the Trump plan and this far-right government."

Abbas said he was particularly opposed to the plan to retain Jerusalem as Israel's undivided capital.

"I won't accept the annexation of Jerusalem to Israel," he said. "I won't record in my history that I sold Jerusalem. Jerusalem does not belong to me alone. Jerusalem belongs to all of us. It's our capital."

"It does not satisfy the minimum of the rights and aspirations of the Palestinian people," the Arab League said.

Abbas added that Palestinians would not accept the Trump administration as the sole mediator in peace talks with Israel, and he would likely present a Palestinian peace plan in a speech at the U.N. Security Council meeting in the coming weeks.