The president told reporters before he left that he has a plan to handle the arrival of a deadly coronavirus in the United States.

Jan. 22 (UPI) -- U.S. President Donald Trump met with Pakistani and Iraqi leaders and spoke to the press before leaving the World Economic Forum in Davos, Switzerland, on Wednesday.

Wrapping his two-day visit to the 50th annual gathering, Trump held bilateral meetings with Pakistani Prime Minister Imran Khan and Iraqi President Barham Salih on the sidelines of the event.

Pakistani Foreign Minister Shah Mahmood Qureshi said Trump and Khan had a wide-ranging, hour-long discussion that addressed measures in Pakistan to remove itself from the Grey List of nations suspected of money laundering and terrorist financing by the Paris-based Financial Action Task Force, an agency set up by the G-7 heads of state.

RELATED Greta Thunberg at Davos: 'Pretty much nothing' done on climate change

Addressing reporters before the meeting, Trump said he's offered to help in Kashmir and take up the issue with India Prime Minister Narendra Modi.

"What's going on between Pakistan and India -- if we can help, we certainly will be willing to," he said. "We have been watching it very closely."

Before his meeting with Salih, the U.S. president told reporters he would discuss the Iraqi Parliament's approval of a non-binding resolution that calls on the United States to withdraw troops there.

"We're working on a lot of things together," Trump said. "We have a whole host of difficult things to discuss, and some very positive things also."

Before leaving Davos, Trump staged an unscheduled news conference in which he criticized the impeachment proceedings in Washington, D.C. The Senate established the trial rules on Tuesday and will hear opening arguments by Democratic managers on Wednesday.

During the 40-minute news conference, Trump dismissed the ordeal as a "total hoax" and called Democratic accusers in the House "very dishonest people."

He said he would like members of his administration to testify at the trial -- like acting White House chief of staff Mick Mulvaney and former national security adviser John Bolton -- but said they cannot on national security grounds.

Trump also said his administration has a plan to deal with the arrival of a coronavirus in the United States, after the virus has killed nearly a dozen people in China so far.

"We do have a plan, and we think it's going to be handled very well," he said. "I think China's in very good shape also."

The U.S. Centers for Disease Control and Prevention confirmed Tuesday the first case has been recorded in Washington state.

Trump is expected to arrive back in the United States late Wednesday afternoon.

World News // 18 hours ago
At least 6 killed by gunman in shooting spree at Russia's Perm State University
Sept. 20 (UPI) -- At least six people were killed and more than two dozen were injured at a university campus in central Russia on Monday after authorities say a gunman opened fire and targeted victims at random. 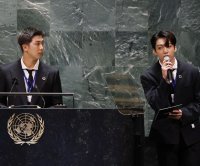 World News // 8 hours ago
BTS praise youth response to COVID at opening of U.N. General Assembly
Sept. 20 (UPI) -- The 76th session of the United Nations General Assembly began on a distinctly musical note Monday with an appearance by K-pop supergroup BTS, who had words of encouragement for young people facing COVID-19.

World News // 14 hours ago
At least 100 homes destroyed after volcano erupts in Canary Islands
Sept. 20 (UPI) -- About 100 homes have been destroyed in the Canary Islands and thousands of people evacuated danger zones after a volcanic eruption sent lava flows to the surface, authorities said Monday.