Crown Prince Mohammed bin Salman of the Kingdom of Saudi Arabia is seen during a meeting with President Donald Trump in the Oval Office at the White House on March 20, 2018 in Washington, D.C. File Photo by Kevin Dietsch/UPI | License Photo

Of those executed, 88 were Saudi nationals, 90 were foreign nationals and 6 were of unknown nationality, Reprieve said in a statement.

"This is another grim milestone for Mohammed Bin Salman's Saudi Arabia," Reprieve director Maya Foa said. "The Kingdom's rulers clearly believe they have total impunity to flout international law when it suits them."

On April 23, 2019, Saudi Arabia executed 37 people in a single day, including three people who were children at the time of their alleged offenses.

Saudi Crown Prince Mohammad bin Salman said the regime plans to restrict the scope of the death penalty by limiting the number of capital offenses and introducing alternative punishments such as life imprisonment, in an April 2018 interview.

Reprieve said the number of executions has instead continued to rise under his rule with four executions already having taken place in 2020.

Foa also condemned the fact that Saudi Arabia will host the 2020 G20 summit after assuming the host role from Japan late in 2019.

"A country that tortures and executes children should be a pariah state not preparing to host the next meeting of the G20," said Foa.

World News // 1 hour ago
Israel to transfer all travelers from abroad to quarantine facilities
April 1 (UPI) -- Israeli Prime Minister Benjamin Netanyahu on Wednesday mandated that all new arrivals to the country must be placed into quarantine.

World News // 2 hours ago
Taliban, Afghanistan prepare for prisoner swap
April 1 (UPI) -- Afghanistan and the Taliban will begin a long-awaited prisoner exchange this week, the Taliban and sources within the government said Wednesday.

World News // 3 hours ago
South Korea woman charged with baby's death after giving birth in restroom
April 1 (UPI) -- Police in South Korea arrested a woman after she gave birth in a public restroom then threw the newborn baby out a window, according to reports.

World News // 5 hours ago
Prince Charles: COVID-19 is 'strange,' 'frustrating' and 'distressing'
April 1 (UPI) -- After he himself picked up the coronavirus disease and is now in isolation, Britain's Prince Charles spoke publicly Wednesday for the first time since his diagnosis. 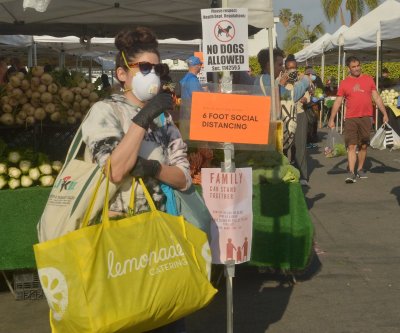 World News // 7 hours ago
South Korean companies calling workers back to office
SEOUL, April 1 (UPI) -- The South Korean government has warned people to keep up social distancing, but a growing number of companies are ordering employees back to the office as the number of new cases of coronavirus stabilizes.