TAIPEI, Taiwan, Jan. 11 (UPI) -- Incumbent President Tsai Ing-wen won a second term in a landslide victory Saturday, defeating challenger Han Kuo-yu in an election that was widely viewed as a referendum on Taiwan's sovereignty and its relationship with an increasingly assertive China.

Tsai won 57.1 percent of the votes to Han's 38.6 percent, according to a final count by Taiwan's Central Election Commission. She received more than 8 million votes, the highest amount since direct presidential elections first began in 1996, a mandate that she seized upon as a message of defiance to China's stated goals of unifying with Taiwan.

"The results of this election carry an added significance because they have shown that when our sovereignty and democracy are threatened, the Taiwanese people will shout our determination even more loudly back," the 63-year-old Tsai said at a news conference Saturday evening.

"I hope the results of today's election clearly delivers the right signal to China," she said. "We hope that they the understand the expectations of the Taiwanese people and our perseverance. ... I want the Beijing authorities to know that democratic Taiwan and our democratically elected government will never concede to threats."

"This was a victory for the republic," 31-year-old engineer Willy Liu said. "We wanted to elect a person that makes it clear that we are our own country and part of China."

Han conceded on Saturday evening from the southern city of Kaohsiung, where he was elected mayor in 2018.

"I called Tsai and congratulated her," he said. "I did not work hard enough and failed everyone's expectations."

Large crowds began forming at some polling stations ahead of the 8 a.m. opening time on a warm and sunny day in Taipei. President Tsai cast her ballot early Saturday morning in her home district of Yonghe and urged voters to turn out.

Record numbers of voters showed up at the polls, with many citing fears that an authoritarian China was seeking to encroach upon their democracy as a key motivation.

"I think if I don't vote this time, maybe I won't be able to vote next time," said Tsai Wan-Jen, a 37-year-old who works in sales for computer components. "I'm worried about our relationship with China. We have the right to vote and can choose the government we want, but their system is very different."

Chinese President Xi Jinping rattled Taiwan in January last year when he said in an address that the country "must and will be" reunited with China and warned that Beijing reserved the right to use force to achieve the goal.

The ongoing pro-democracy protest movement in Hong Kong, and what many felt has been a heavy-handed response by the Beijing-aligned government there, also clearly helped to galvanize support for Tsai, who had been trailing Han in the polls as recently as August.

"This is very important election because of the Hong Kong issue," said Chang Jie, a 28-year-old dentist waiting in line to vote in Taipei on Saturday. "Taiwan needs people to vote for President Tsai because she will protect our status as an independent country."

Beijing remained relatively quiet in the weeks leading up to the Taiwan election, but some observers have charged China with attempting to tilt the election results through sophisticated fake news and disinformation campaigns.

"China has been more focused on influencing the voters and using Taiwan's democracy to gain the policies they want," said Su Tzen-Ping, a board member of the non-profit TaiwanFactCheck Center. "There are professionals producing and spreading information. It's much cheaper than launching a military invasion."

Tsai's tough stance towards China clearly overwhelmed the appeal of Han, the mayor of Kaohsiung who ran on anti-elite populism and the prospect of better business ties with China, which remains Taiwan's biggest trade partner.

"Han is not a classic politician," said supporter Wei Shen, a 30-year-old who works at a supermarket, at a subdued rally outside of the KMT headquarters in Taipei on Saturday night. "He wanted to bring in people who have been ignored by politics."

After the glow of her resounding victory fades, Tsai will wake up to a second term still facing a number of challenges from China, which frequently flexed its muscles in 2019 with military exercises and other provocations in the Taiwan Strait.

After Tsai's victory in 2016, Beijing suspended diplomatic contact with Taipei and has worked to further isolate the island of 23 million from the international community. Fifteen states maintain diplomatic ties with Taiwan and it is not recognized by the United Nations.

On Saturday night, Tsai made an appeal to the rest of the world to work together with Taiwan.

"Taiwan is an indispensable member of the international community," she said. "All countries should consider Taiwan a partner, not an issue.

World News // 12 hours ago
Biden says 'everybody' should be concerned about monkeypox cases
May 22 (UPI) -- President Joe Biden said Sunday that "everybody" should be alert to the recent outbreak of monkeypox cases in the United States and Europe and stay on top of developments. 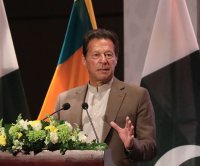 World News // 13 hours ago
Zelensky: Russian offensive in Severodonetsk pushed back by Ukrainian forces
May 22 (UPI) -- The Russian military continued their attack on the key eastern Ukraine city of Severodonetsk on Sunday, but Ukrainian President Volodymyr Zelensky said they were eventually pushed back after fierce fighting.